Our ultimate destination was Trilby Station, which is located on the Darling River, about 120 kilometres downstream from Bourke, but we went the long way around. Our “via” point was Mungo Lake National Park, which is part of the Willandra Lakes Word Heritage Area. It is located about 100 km north east of Mildura in Victoria.

I had forgotten that Melbourne and Adelaide truckies, wanting to be home by the weekend, leave Brisbane on Thursday morning. It was on Thursday morning that we set off and found ourselves jockeying with them for space on the Cunningham Highway. But that situation eased when we turned off at Warwick to follow the New England Highway to Stanthorpe, to spend the first night of the trip with Ruth’s brother David and his wife Anne, on their bush block just out of town.

There were fewer trucks again next morning as we continued on to Tamworth, where we turned right to Gunnedah to start a couple of days driving on roads less congested than the major Highways. After a pleasant and quiet night at Lake Keepit we turned south just past Gunnedah and continued on minor roads, almost to the major town of Orange, before turning right to Forbes, from which point we followed the main highways to Balranald. We spent intervening nights in Molong and Hay.

There must have been good rainfall across that area of NSW over recent weeks. Luxuriant green wheat was about knee high. The wheat fields, of which there are endless expanses, are interspersed with the brilliant yellow of canola. No matter what else is missing from the dinner 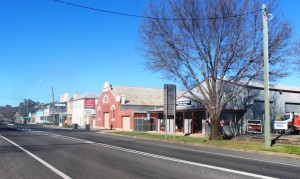 A quiet street in Molong, NSW.

table in the months to come there should be no shortage of bread or margarine.

After spending a night at Molong, near Orange and then turned west to Forbes from where we followed the Newell Highway to West Wyalong.

After passing through West Wyalong, the undulating country of the Western Slopes was behind us and the flat country began. The Hay Plains has to be one of the flattest areas of Australia. For much of the drive to Hay the 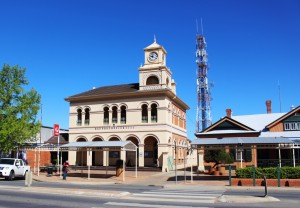 horizon is a huge circle, barely interrupted by a hump, let alone a hill. The flatness extends well past Balranald. The Murrumbidgee River flows through the middle of it all and finally strikes sufficient resistance to turn south where it joins The Murray River upstream from Robinvale. 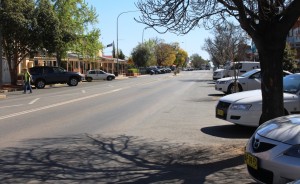 The deserted main street of Hay on a quiet Monday morning 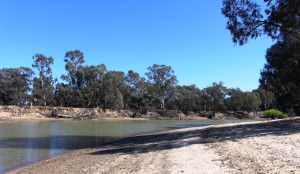 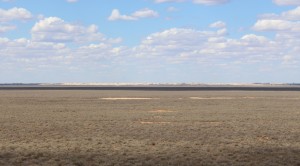 Mungo is a further 150 kilometres north west of Balranald. The final two thirds of the distance is unsealed, but in excellent condition. We travelled at 70 to 80 kph for much of the way.

I think it fair to say that Lake Mungo is probably different things to different people. It is regarded by those who claim traditional 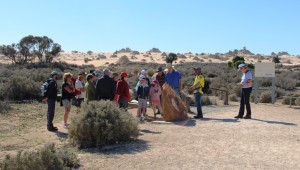 A tour group being guided by an Indigenous ranger

ownership and people such as anthropologists, paleontologists and natural historians as a very significant place. Those who love the outback enjoy its isolation. If you are interested in early Australian history then there is plenty there for you. 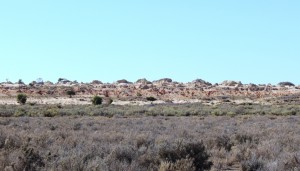 The Walls of China at Mungo

stream. Many thousands of years ago the lakes were full of water.  They are now dry, unless there is a local flood, but even then the water does not hang around for long. Prevailing winds (westerly) have created dunes on the eastern edge of the lake. But they are not ordinary sand dunes. The Mungo dunes are comprised of a 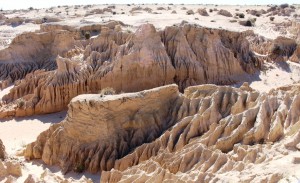 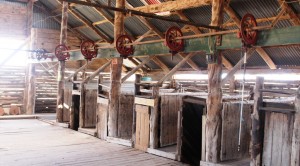 material that looks like sand but weathers selectively to form intricate geographical formations. These structures are called lunettes, because they appear like small lunar landscapes. At Lake Mungo the main lunette area is called The Walls of China but I’m not really sure why. The area looks much more like a lunar landscape that the Great Wall of China.

The National Park is managed from the old homestead area of Mungo Station. The park is comprised of Mungo and the neighboring Zanci Station.  A visitor centre, a new building near the original Mungo wool shed, tells the story of Lake Mungo and its inhabitants from the earliest times until today, in comprehensive and eloquent style. Self guided tours are available and are supplemented by Indigenous ranger lead tours that deal with the cultural aspects of the area. 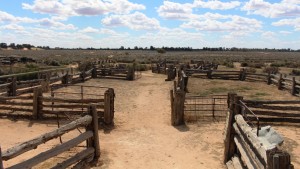 Because of approaching bad weather we were faced with a choice. We could do the guided tour of the Walls of China or take the 70 kilometre loop drive around the lake and surrounding areas. We could not do both and still get back to Balranald that day, which we wanted to do to avoid the approaching rain. To stay risked being trapped, as all roads leading to and from Mungo are dirt and subject to closure after rain. 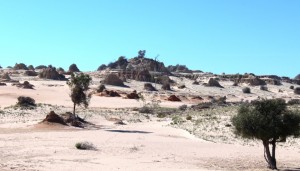 Part of the lunette area known as The Walls of China

The mortal remains of a male and a female Aboriginal people were discovered in the area of the Walls of China at different locations in the late 1960s and early 1970s. I understand that the tour, which includes a walk through this area, covers the details of this discovery. As the guides are Indigenous park rangers, we concluded that the experience would be cultural rather than scientific, so we opted for the drive. We wanted to see the terrain and visit the two historic sheep stations that make up the Lake Mungo National Park. 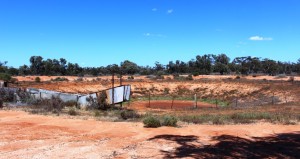 The journey to the first point of interest is a 10 kilometre crossing of the dry lake bed which leads to a boardwalk that provides views of The Walls of China lunette. The area is set up to give a good view of the extensive dune that runs for most of the length of the eastern shore of the lake. The accompanying photos will give you a better idea than my comments. But does it look like walls, Chinese or otherwise? I don’t think so. But it does look a bit like the surface of the moon. 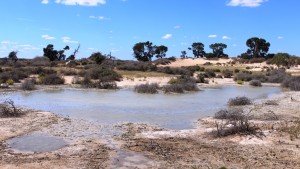 Most of the features of the circuit drive relate to the period since Europeans arrived but Red Top Lookout, where the road swings from the lake bed and crosses the dune, provides a close up view of the fantastic erosion patterns that result from weathering in this environment. A catwalk extends to the edge of the eroded area and provides a real panorama. 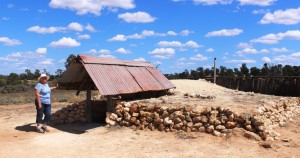 The under ground cool storage room an Zanki Station

The explanatory signage is extensive and comprehensive. But the authors could not resist the temptation to ride their hobby horses through the text. Visitors are told repeatedly that the once abundant marine environment is now desolate because of climate change and that carbon dioxide is the villain. All this happened over a period of 100,000 years, mind you. I think Australia’s inland sea was evaporating at about the same time. Or was it draining because sea levels were falling? 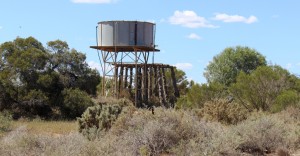 The more likely reason for the dry lake beds is that some time during previous millenia the Lachlan River, which in earlier times had flowed through the series of lakes, changed its course to combine with the Murrumbidgee in its journey to the Murray and ultimately to the Southern Ocean. The Lachlan rises in the western foothills of the Great Dividing Range, an area of much higher rainfall than that enjoyed by the minor local stream that was left to the job of providing the lake chain with water. 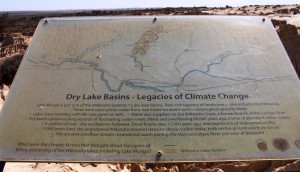 My other comment about signage is that much of it needs replacing. This is a problem that we find Australia wide. When places like Mungo are set up, the information signs are set up very professionally and tell the story very well, but then no one bothers with maintenance. Our harsh outback environment is hard on the graphic artwork of signs. They don’t last forever but the authorities don’t seem to notice. 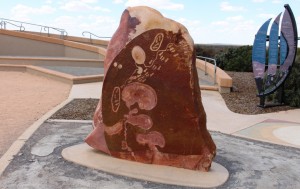 A sculpture at the Meeting Point at Mungo visitor centre

We packed up and left Mungo at about 3 pm, covering the 150 kilometres back to Balranald in just less than two hours. It rained in Balranald that night and in a lot of other places as well. A quick check of the NSW Main Roads Web site showed that all of the dirt roads on which we were to travel to Trilby Station were closed.