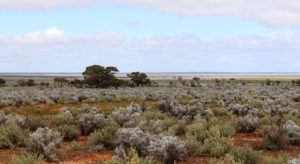 The fine weather did eventuate and with a forecast that suggested a few days of fine weather the decision was made to visit the Gawler Ranges. So we phoned Mt Ive Station to ensure that a powered site was available. Having received a satisfactory answer, we set off into a stiff head wind that stayed with us for the entire 200 kilometre journey. 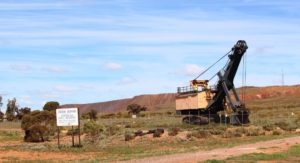 The turn to Mt Ive Station is at Iron Knob, a distance of a little over 70 kilometres. We last visited Iron Knob over 50 years ago. At that time it was a thriving mining town. Now it is little more than a ghost town. The mine still appears to be in operation so it must have changed to a fly in fly out basis of staffing. A pity, but that’s progress, I suppose. We stopped for morning coffee and to air down the tyres in preparation for 125 kilometres of dirt and gravel. 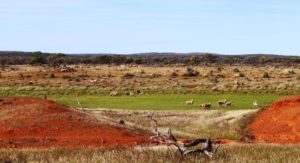 We passed several flocks of sheep. Stations in the Gawler Ranges area are mostly involved in wool production.

The road was in quite good condition. Much of it has been recently graded and a grader was working on a section of road as we came through.  Although we were entering a range of mountains the road was mostly without hills, just a series of low ridges and shallow gullies. We were travelling through a long narrow gap in the range. Creek beds had all been stabilised so were not a hindrance to maintaining a reasonable speed. As always on these types of roads the cattle grids required careful negotiation. 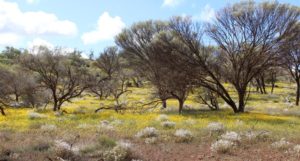 There were wild flowers along the way but in unique areas. In between and interspersed with the flowers was thousands of hectares of a small silvery green leafed plant with small white flowers. It proliferated in the valleys and lower slopes of the ranges put did not reach the hill tops, at least not in quantity. 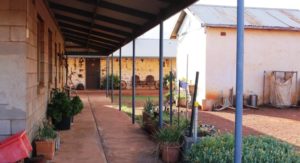 Some of the historic stone buildings

We reached the homestead in the early afternoon. Mt. Ive homestead is itself set in a valley between two prominent mountains, one of which is Mt. Ive. The station has been in continuous operation since 1864. Many of the buildings are original and are built of local stone. Much of the local stone naturally breaks into blocks, suitable to use as building material. Later structures are of more modern materials. 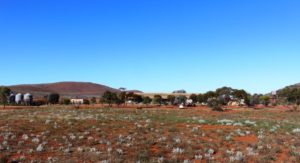 View towards the shearers quarters and part of the caravan park area. Mount Ive is in the background.

We have arrived here at a quiet time of the year and some potential visitors have probably been deterred by forecast rain. There was only one van and a camper trailer when we arrived but a couple of car loads arrived later to stay in some of the stone cottages. The area is popular as a long weekend destination from Adelaide and is busy during school holidays in the cooler months.

The clouds have dispersed to reveal a clear starry sky but the wind had continued so it was quite chilly. Thumbs up for the power supply and the heater! 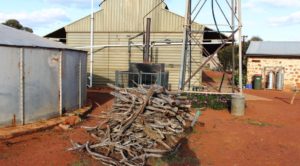 The hot water system was not very efficient

Mt. Ive Station is popular for its many four wheel drive tracks. As we were only there for two nights we were limited in what we could do so we chose the premier drive, that to Lake Gairdner, which is reached via Mt. Ive station tracks but is enclosed within Lake Gairdner National Park. Lake Gairdner is a huge salt lake with a dry lake bed in the warmer months. It has been the site of several land speed attempts and annually is the location for salt lake car races. A club house for this event stands by the lake. 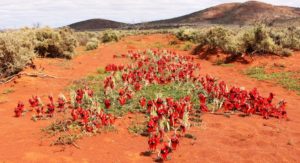 The track is really a road and although corrugated was in quite good condition for a road of its type and location. Not so vehicle friendly was two side roads that lead to other points of interest. They were real four wheel drive tracks and required driver attention to negotiate them safely. 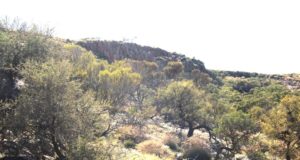 The organ pipes are at the top of a ravine

The first side road leads to an area known as The Organ Pipes. The Gawler Ranges contains areas of a stone named rhyolite, the main characteristic of which is to separate into columns. There are several other areas in Australia with similar formations with similar names. One of the best known is in the Mt. Kaputar National Park in New South Wales between Narrabri and Bingara. 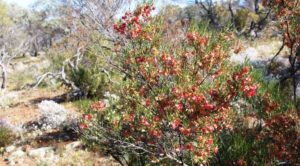 A flowering bush beside the path to the organ pipes

After negotiating about three kilometres of loose stones and a steep gulley we arrived at the parking area. The rock formation was at the top of a second ravine. Younger legs than mine would have made short work of the stony climb. I satisfied myself with walking until I had a clear view and snapping some pictures. But I did find and photograph two new flowering trees that I had not previously seen. 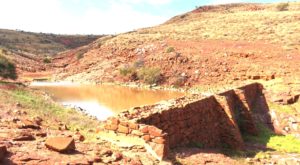 This water storage was built in the 1880s

The second side road leads to the site of a stone dam that was built of local stone in the 1860s. It still retains water and is an excellent illustration of rock wall construction. It spans the head of a charming ravine, the rocky sides of which are decorated with wild flowers that appear almost as a planted garden. Views down the valley to the hills opposite would have made this an excellent site for a dwelling, at least during a relatively wet winter. Summer would be quite different. 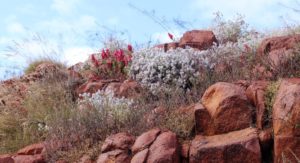 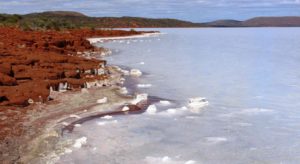 Chunks of salt at the edge of the lake.

A further ten kilometres from the second road brought us to the lake. Lake Gairdner is huge, with sweeping bays formed by hills that protrude into the lake in the form of promontories. About 200 mm of water currently covers the salt floor but lumps of salt rock are visible along the shoreline. The corrugated iron club house overlooks this magnificent view. Motor racing would be the last 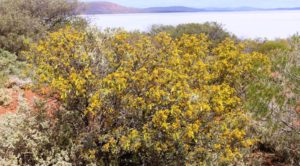 The Wattle was in bloom by the lake

thing that you would expect to see here. Aquatic sports seem more likely but such are the contradictions of remote Australia. 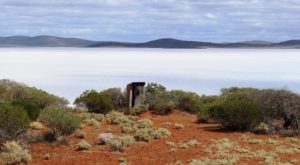 The loo against a view

I am sure that the club house contains toilet facilities, but when not in use it is securely locked. So a single toilet has been provided for casual visitors. It sits on a point with its back to a magnificent view. It has a small glass panel in the door in lieu of a lock. Two stout ropes, secured on either side by steel pegs, go over the roof to ensure that it does not float away in a flood. 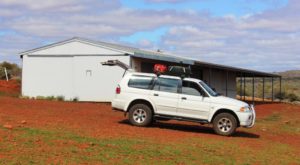 The Challenger parked next to the motor racing club

We enjoyed morning coffee at a picnic table at the front of the club house, drinking in, in addition to the coffee, all this natural wonder and beauty. The 400 kilometre return journey, 250 kilometre of which is unsealed, was very worthwhile.  Mt, Ive Station and Lake Gairdner are now ticked off the bucket list. 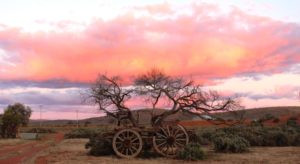 We had intended to spend a couple of nights in the Gawler Ranges National Park but it is far too cold at night at the moment to be 100 kilometres away from a power point.