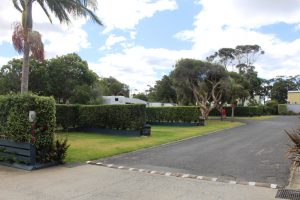 Monday 26th March. We are coming up to our second windy night in Marlo. Last night was rather wild. We had our awning out. That proved to be a mistake. The rafters that reinforce the awning fell out at about 12.30 AM with a loud crash. That got me out of bed in a hurry. I then had to wait for the wind to ease at about 4.00 AM to take the awning in. Not much sleep until then. 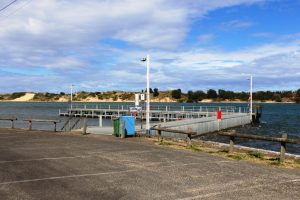 Marlo jetty in the Snowy River

We have spent a quiet day. Ruth did some washing and I completed my first blog for this trip. There is not much to see in Marlo. The town boasts a general store, pub, fishing tackle and coffee shop, a couple of caravan parks and a small motel.

The park that we are in is substantially empty. The tourist season is over. There will be a burst of activity for Easter and school holidays but that’s about it until next summer. Local businesses will be reliant on local people until tourist season comes again.

We have neighbors in the park. They are a young Swiss family. While we are rugged up and staying inside they are getting about in shorts, having their meals outside and playing with their children in the full blast of the cold wind. They don’t think that it is cold at all.

On Tuesday morning the first order of the day, as we moved on, was a call at Orbost Tyre Service to have a slow leak in one of the caravan tyres fixed. That, and a bit of grocery shopping done, we set course for Omeo. So we travelled west to Nowa Nowa, then to Bruthen for the start of the Great Alpine Road. 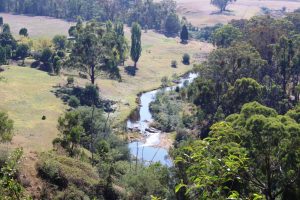 Bruthen is on the Tambo River. The Great Alpine Road follows the Tambo Valley for much of the first 80 km, although the first 10 km of the drive is over a forested mountain range. The road re-joins the river after crossing the range. 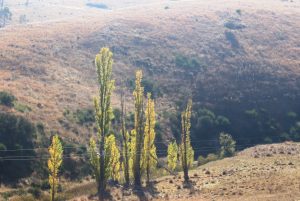 Poplars by the stream

As the trip progresses the scenery becomes more alpine. Farm land occupies the valley floor and the lower slopes, the upper slopes covered in forest. Clumps of Poplars start to appear along driveways and the banks of the streams. The grass is green but there is no sign of any recent heavy rainfall.

There are a few named localities along the road and a couple of towns, the largest of which is Swifts Creek, situated on a creek of that name that joins the Tambo at that point. Road side signs advise that Easter Picnic Races will be held on Easter Saturday. 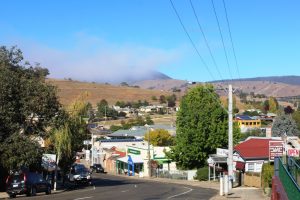 Swifts Creek is at an altitude of about 350 metres. Just past the town the road turned out of the valley and over the next 10 km we climbed a further 400 meters to reach the tableland on which Omeo stands. 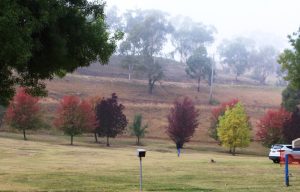 Autumn colours in the mist

The Omeo Caravan Park is located in a narrow valley with the park facilities built beside the stream, which runs along the foothills on one side. Steep hills rise from each side of the parking area. Well established deciduous trees provide summer shade and let the sun through in winter. It was quiet when we arrived but getting crowded when we left. The High Country is popular at Easter. Numbers also increase because of the Easter Saturday rodeo in Omeo. 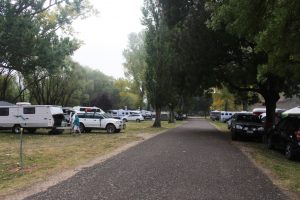 We used Omeo as a base for two mountain tours. 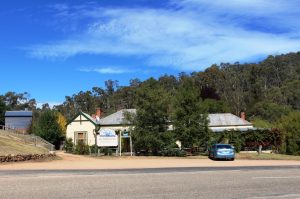 On Wednesday we headed along the southern end of the Omeo Highway and turned into the Bogong High Plains Road, where a serious climb commenced. The winding road was lined in bright yellow paint with yellow snow posts marking the outside edge. The altimeter on our navigator showed 1,740 metres at the highest point. 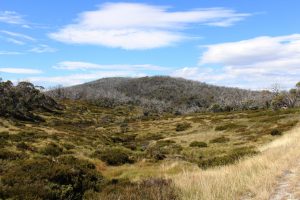 One of the features of alpine areas is dead trees standing above the green vegetation, looking at a distance something grey stubble on a green face. The impact of bush fires lasts for decades. Strangely, the dead standing above the living adds to the grandeur of the scenery.

At that altitude the weather was crisp and clear with some cloud cover. The wind was strong and cold and quite invigorating. Pity there was not time for a walk. 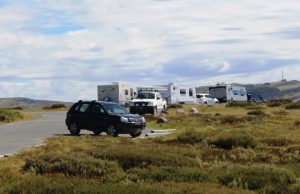 The ski runs of Falls Creek were soon in view at a distance, becoming clearer as we approached. At one point four large caravans stood by the roadside. This is not easy caravan country. I’m glad it was them and not us. 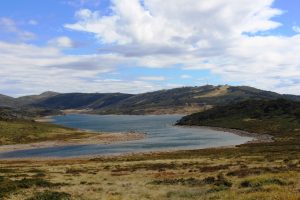 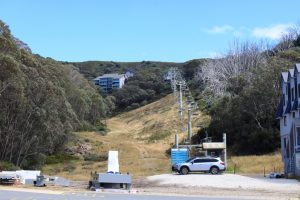 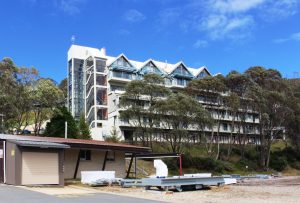 Visitor accommodation at Falls Creek. There is much more than this. 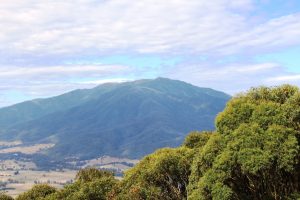 Mount Bogong from the Mount Beauty to Bright road

We had intended to have lunch at Falls Creek, but there was nothing open that we could see. Work was under way in preparation for the ski season. We continued down the mountain to Mount Beauty where we found a cafe attached to a bicycle shop.  Many businesses in that town seemed to still be closed from the summer season.

From Mount Beauty we crossed the range to Bright, famous for its 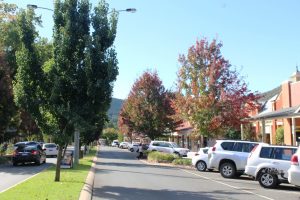 A tree lined street in Bright

autumn colours. We knew that we were too early in the season for the full Autumnal glory of the trees, but it is an attractive town at any time. We have not spent much time there. It is worth a longer visit. 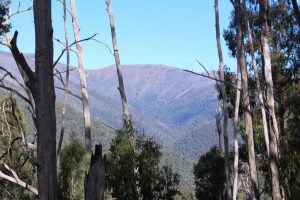 A mountain view on the climb to Hotham Heights

With daylight hours reducing, we pressed on. The climb starts just past Harrietville and is steep, winding, narrow and about 30 km. Travelling east, as we were, we were on the outside of the road. I must confess, when safe to do so, I drove straddling the bright yellow centre line, staying left on approach to right and bends, of which there are many. I had much time to ponder the placement and scarcity of Armco protective barrier. 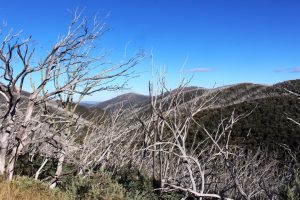 As you approach the 1,830 metre summit, the last few kilometres of road stretches above you, clinging to the scrub covered mountain side like a sloping shelf. Pre-winter road works added to the entertainment. 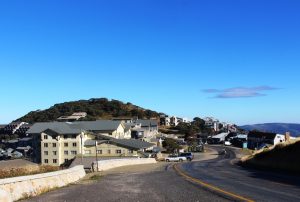 The western approach to Hotham Heights

But the mountain scenery makes it all worthwhile. As you round the final turn at the top, the first buildings of the Hotham resort comes into view, the remainder unfolding as you proceed along its main street. It has, unsurprisingly, substantially increased in size since we drive through many years ago. 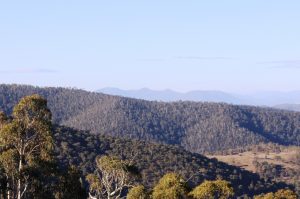 Kosciuszko View near Omeo. Mount Kosciuzzko is the peak second from the left.

Another 100 km brought us back down the mountain to our caravan at Omeo. 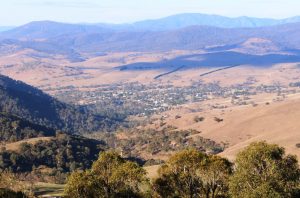 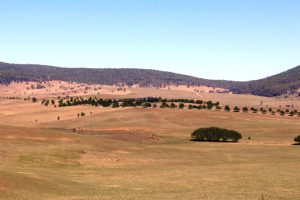 A farm on the way to Hotham

The second tour, on Easter eave, fulfilled a long standing desire to drive over the Dargo Hugh Plains, from Hotham to Dargo. To do this, we returned up the mountain to Hotham Heights, making a short detour into the alpine village of Dinner Plain. This quintessential ski village is 11 km from Hotham, so provides access to the ski fields there as well as its own skiing areas. A number of businesses were open with signs of activity. 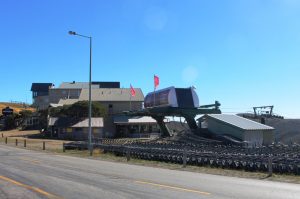 We paused at Hotham, in a partially protected spot right under the summit, for the most elevated coffee ever, except for coffee in an aircraft. But airline coffee is not really coffee, is it, so it doesn’t count. 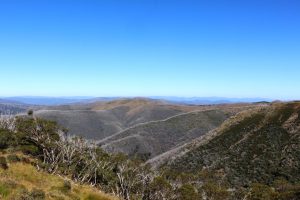 A view from our morning coffee stop 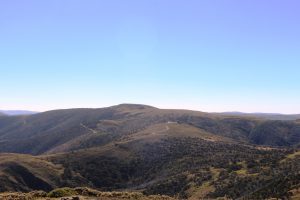 Part of the Hotham ski runs 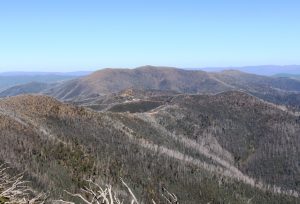 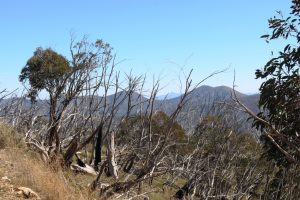 View towards Hotham from the Dargo High Plains Road

The turn into the Dargo High Plains Road is 4 km past the summit on the western side. It commences with a short sharp and narrow sealed decline but soon becomes a gravel road, narrow on mountainous sections but quite wide in flatter areas. We stopped at the appropriately named Mount Freezout rest stop to reduce tyre pressures. 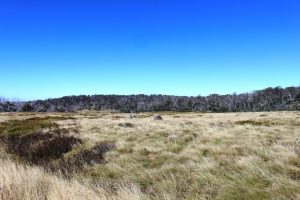 The Dargo High Plains are more timbered than their Bogong counterpart. I have the feeling that driving over them does not reveal their extent. We initially wondered as we drove when we would find them, but suddenly we were driving through undulating pasture lands that reached to the fringing forest. There is evidence that grazing activity continues but it may be on privately owned land. Grazing in National Parks is a live political issue and tends to change with governments.

The road was in good condition generally, with speeds of 60 to 70 kph easily achievable, but some sections were pot holed and there were areas of exposed stone, particularly at the crowns of rises. The sealed road reaches 20 km north of Dargo, so the descent into the valley is on good sealed, if somewhat steep, winding road. 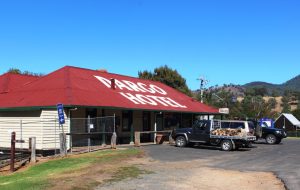 Because of the number of people coming into the area for Easter the Dargo pub was doing a roaring trade. We satisfied ourselves with a picnic lunch in the park and an ice-cream from the general store, before starting our return journey to Omeo.

The plan was to take the Upper Dargo, Jones and Berrigan Roads directly back to base. We were about 16 km into the trip, on Jones Road, when we decided that we had not chosen well. The Parks Victoria officer has assured us that the road was good. Two wheel drive road, he said. The reality was a narrow ever ascending track, badly washed out and comfortable at no more than about 20 kph. That meant that we would still be on the track late in the day. 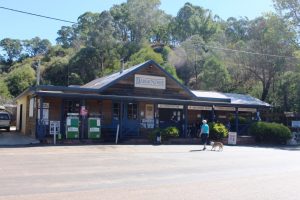 We continued until we found a piece of track wide enough to turn and made our way back to Dargo. We had two choices. Either to return over the High Plains to Hotham or go south via Bairnsdale and the Great Alpine Road. The latter is sealed all the way, so much the quicker route, and only about 20 km longer. It was no contest. Via Bairnsdale it was. We arrived back at the van at about 7.30.

Good Friday dawned cool and foggy. A heavy mist hung over the valley and lay in dense banks along the face of the mountains. We met many vehicles making their way into the high country for Easter and school holidays. There were a good number of caravans, more camper trailers and hosts of four wheel drives, pack racks piled high with camping gear. By the time they all arrived there would scarcely be a vacant camp site to be had.

But it was back at Bruthen, on the Princes Highway, that we really met traffic. You could almost have believed that Melbourne was being evacuated. The combination of Easter and school holidays sure had Victorians on the move. The continual strings of traffic, moving at near the speed limit, did not abate until we were approaching our destination at Drouin, quite late in the day.

We are taking a four day break here for some family visiting. Then two days in Melbourne with friends, so activities will not become bloggable again until we head out of Melbourne.