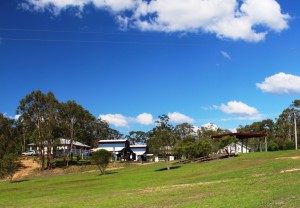 Packed and gone by 10 am.  A short call at the ATM then Bunnings and we were on our way.  A good run, except for impatient truckies to Kilcoy, where we refueled and had lunch in the park before turning north onto the Kilcoy Murgon Road. 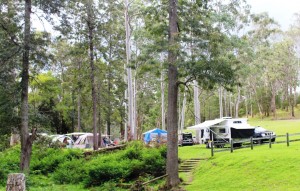 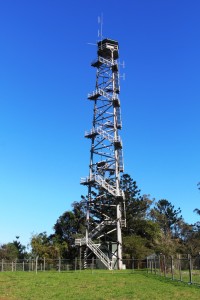 Civic activity is centered on preservation of the famous Jimna fire lookout tower that stands beside the main road just north of the town.

Jimna village, the fire tower and Peach Trees Camping Area are all within Jimna State Forrest.  The camping area is located on Yabba Yabba Creek, which is a tributary of the Mary River, so from time to time provides some of the water that floods Gympie and Marlborough. The evidence of such excess lines the banks of the stream in the firm of flood debris.

The camping area was well occupied with Easter campers. A sign at the gate announced that the park was fully booked.

We found a spot by the creek, a good distance from other campers, although we were engaged in 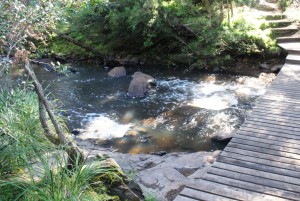 conversation by two strolling couples, the second of which joined us for happy hour.  As if to emphasise our proximity to nature a large monitor lizard wandered by. We had been welcomed by some screeching parrots and as we chatted grey kangaroos came out of the bush to feed on the fresh grass. As our new friends were leaving, a possum casually walked between the van and the car. Back to nature!

It was a cold night and with no power we were early to bed to be lulled to sleep by the rippling stream.

The sun came over the hill and shone into our front window, a clear signal that it was time to get up. It soon warmed up the van. Breakfast was taken outside in the sunshine. Packing complete, we said our goodbyes to our new friends and headed for the gravel road leading us north. One of the objectives of this trip is to put up some distance on unsealed roads. Our off road van has not done much work off road. I want to get more experience on dirt and gravel before we tackle more ambitious treks like Cape York and the Birdsville Track. 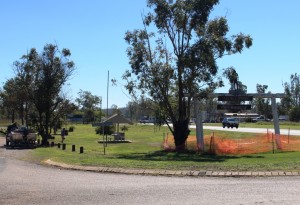 We had about 70 km of quite good gravel Road, the first 50 of which was through hilly forest and the final 20, plus some sealed road and highway, through undulating farm country.  There had been good rain through the area, so the grass was green and grazing cattle were scattered over the pastures.

The Kilcoy Murgon Road joins the Burnett Highway just south of Goomeri, so we motored on through that town, stopping 70 km further on at Ban Ban Springs for fuel and lunch. A further 12 km on we turned right towards Mingo Crossing and Mount Perry. This road alternated between tar and excellent recently graded gravel. In readiness for Easter tourists, no doubt. 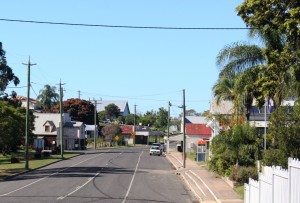 There is a small caravan park by the Burnett River at Mingo Crossing that was badly damaged by flood water about a year ago. It has not been restored yet so we continued on to Mount Perry, getting the last powered site in the small caravan park. Our visit has coincided with the Mount Perry “Royal” Easter Show, so things are jumping in the old town. 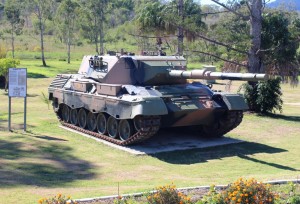 Our site is in the back corner of a well equipped and quiet park. No rippling stream to put us to sleep but quiet will be a good start.

Mount Perry owes its genesis to copper, gold and timber. Copper was discovered in the second half of the 1800s. As the timber was cleared to access the copper its value was recognised and a timber industry commenced. Later gold was found. The problem of 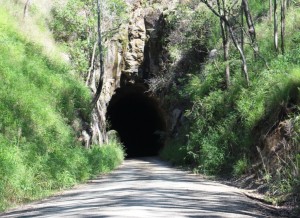 getting products to market ultimately lead to a railway being built from Bundaberg. A tunnel was needed to access the Mount Perry valley so the longest unsupported rock tunnel in the Queensland rail system was built, opened in 1883 and was used until 1960. It was dug by mainly Chinese labor through the Boolboonda Range so it is known as the Boolboonda Tunnel. It is about 190 meters long and a 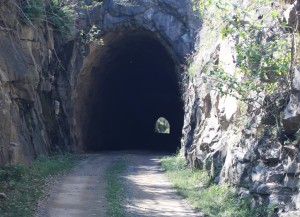 South entrance – Boolboonda tunnel – with light at the end

single rail width. The rails are long gone but the tunnel is now used as access to some farms and as a residence for a bent wing bat colony. We drove through and back again as have many others. There were four other vehicles there at the same time despite it being over 20 km from town.

Not far away, on the way back to town, we had noticed a winery, about 3 km along the to read to Monto. We decided to call. Wonbah 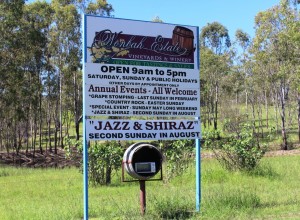 Estate has been there for about 13 years. They produce a range of wines including ports and liqueurs. They host a number of events during the year, including the chance to get your feet among the grapes in February and a Jazz & Shiraz event in August. There is space for caravans to overnight. Sounds good!

We made a modest purchase of a white, a red and a white port. We will take them home to share with family and friends. 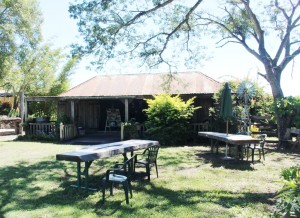 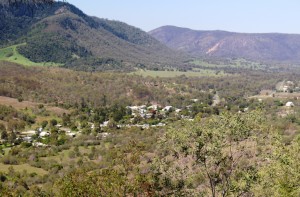 On the way back to town a short detour took us to a lookout above the town, with great views of the valley and town area. The valley is rather narrow so the town is strung out along its main street with a few short streets on either side.. From this vantage point it was off to the show grounds to see how the locals entertain themselves.

There were hundreds of motor 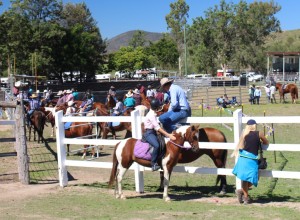 vehicles parked inside and outside of the grounds. The area surrounding the arena was packed with horse and cattle transport vehicles. A lively program of ring events was under way, to the accompaniment of that kind of commentator that won’t stop taking while he has a microphone in his hand. People were flocking around side shows and food stalls almost uniformly dressed in long sleeve shirts, jeans and boots. But the 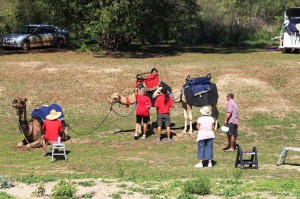 Equestrian competition is well supported throughout the area and the agricultural shows that are held on successive weekends through the area clearly provide opportunities to participate. I was interested to see the age range of female participants. Clearly it is not a sport just for the young. 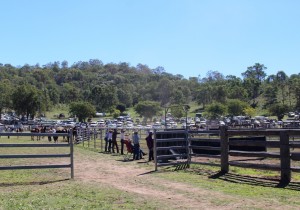 We had lunched on hot dogs and chips so after a fair bit of tramping around we went back to the van for a rest, which became a nap. There was more to come. A country show is not complete without a fireworks display. At 8pm sharp the first rocket went up. It was the precursor to 10 minutes of exciting entertainment. Most of the day’s crowds were gone but a good group of 200 or so locals were ready to party on. But we left them to it. 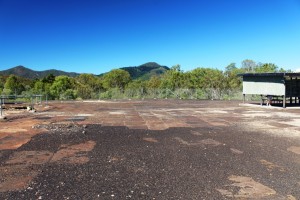 The copper mine was in the hill behind the town with the smelter just below it. The last owners didn’t leave much equipment behind when they left, but as a sort of memorial, paving blocks cut from the slag residue have been laid over the original slag dump, with a picnic shelter in the center. Photographs depicting the history of both mine and town are on display. A gold mine is still in operation with workers bused to the site each shift. Some miners appear to be residents of the caravan park.

The days have been sunny and warm with cool clear nights, not much cloud and only light winds. It is perfect travelling and sleeping weather. I wonder if it is always like this. Is there a real estate agent in town?

The road to Eidesvold crosses and at times follows mountain ranges, for the 80 km of the journey. It is steep in places with low gear warning signs for heavy vehicles. We travelled a few slow kilometers behind a sideshow truck moving on to the next show. 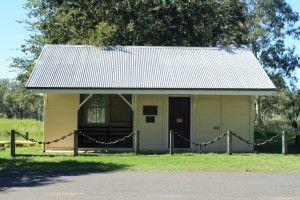 At the Burnett Highway we turned right for a few hundred meters to the Ceratodus rest area, both for morning tea and to see the memorial to the railway pioneers who brought rail transport to North Burnett. The memorial take the form of the original Ceratodus railway station which has been moved to the site and supplemented with written history in the station waiting room and in an adjacent barbecue area. 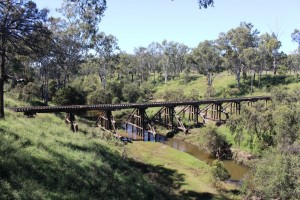 Old railway bridge over the Burnett River at Ceratodus

The rest area is located on the banks of the Burnett River. We looked down at what was a very modest flow and wondered how such a puny stream could wreck such devastation on Bundaberg. The river would have been 10 meters below the bridge but flood waters had lodged limbs in the branches of trees another 10 meters above the road. 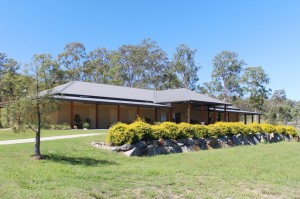 We arrived in Eidesvold at a about midday to find that no fuel was available in town and that the first fueling point in our direction of travel was at the limit of our range. The R. M. Williams Bush Learning Center allows over night stops in their grounds, so here we stayed.

The Learning Center is a combined memorial to the great R.M., an information centre and an art gallery associated with the local Mari People. It is quite new and well set up. Williams moved from South Australia to a property West of Eidesvold about mid life. The citizens of the area regard him as their own. 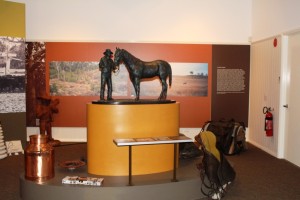 A bronze sculpture of R.M. Williams and horse

Williams lived well into the video era. One of the displays is a recorded interview with him. At the conclusion he is asked how he would wish to be remembered. His reply was, “That I tried”.

There was not much else open in town. Fuel is available from 7 am tomorrow. The service station owner is not trying very hard at all!