The sunshine and warm weather have gone, to be replaces by cool cloudy and rainy conditions. All areas through which we have travelled have badly needed rain so we shouldn’t complain. So we won’t!

But we did spend the morning around the van – a bit of shopping and some work that needed to be done. After lunch we went exploring again.

As I was born in Taree and lived in the area until I was 15, I am familiar with the Manning River that flows past the town and empties into the ocean at Harrington. But I have never thought much about its source. During map study as part of planning for this trip, I noticed that a stream that has its origins high in the Barrington Mountains was marked “Manning River”. Sure enough, they are one and the same. On our drive down to Gloucester from Walcha we crossed the Manning a couple of times but could not stop for a photo due to narrow roads and narrower bridges. We had also been told about the Bretti camping area and had caught just a glimpse of it on the same journey. This time a steep hill and the caravan pushing from behind swept us past without the chance of a real look. So we took an afternoon drive back north to see both.

Bretti camping area. Where the Barnard meets the Manning

Bretti is about 40 kilometres back up the Walcha Road. It is located in the most perfect valley where the Barnard and Manning Rivers converge. The road runs along the edge of the mountain above the valley, but only for a short distance, so the view from the road is tantalisingly brief. 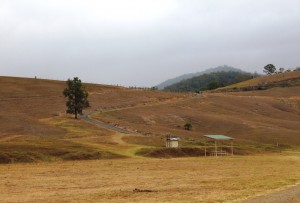 The road runs along the ridge above Bretti camping area

The camping area runs along the banks of both rivers. Facilities are minimal, with only a couple of small toilet blocks, but there is plenty of water in the river and the area is intended for self sufficient campers. There were probably 30 camps and groups. Double that number would not have crowded the area! 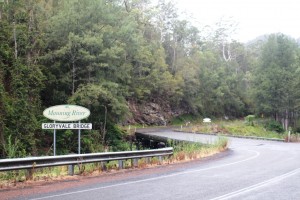 Gloryvale Bridge over the Manning River

It began to rain again as we started back, so a couple of photos of the Manning River had to be taken dodging the rain. You will see that this far from the sea it is only a small stream. A camper to who we spoke at Bretti told us that the Manning has 153 tributaries flowing into it between its source and the ocean, so no wonder it is so much larger at its mouth. 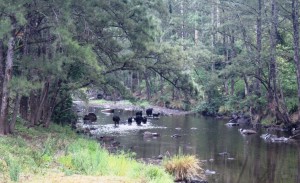 The rain had settled in for the afternoon so we went back to the van to shelter and warmth. It had become quite cool.