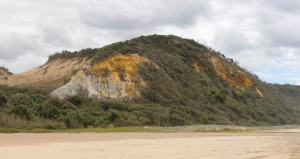 The sun rose over the dunes, but was sharing the sky with cloud patches. We found ourselves at the end of the family group queue when we wanted to wash the breakfast dishes. Two of the men were on duty for dish washing. It took them forever. But finally our dishes were done so we had another cup of coffee and then went exploring. 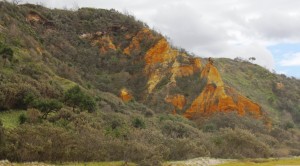 Cathedrals on Fraser, where we were staying, is named for the coloured sand formations, known as “The Cathedrals”, because of their shape. They are formed from highly coloured, solid sand material and have weathered into their shape over eons. We made several stops for photos and for a short walk where a pathway has been provided at the area known as Red Canyon.  There are many really remarkable formations in this area. 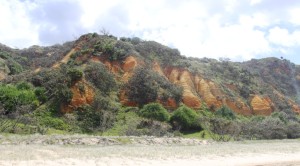 The path at Red Canyon leads to the foot of solid sand cliffs that reach tens of metres up the side of the sand dunes. A viewing platform and information board is supplied. 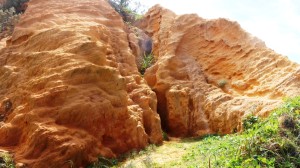 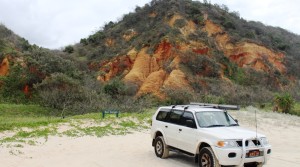 The Challenger at The Cathedrals 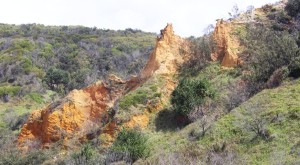 More of The Cathedrals 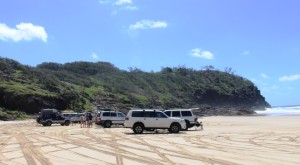 Our objective was Indian Head, the rocky promontory that is the northern end of the Seventy Five Mile Beach. It was named by Captain James Cook during his passage along the Australian coast in 1772. As he sailed past, he could see a number of Aborigines standing on top of the headland watching him watching them. Our arrival today was similar. The vehicles of a tag-along group were parked at the bottom of the access path and almost all of the occupants were standing along the summit. Indian Head looked like it had had a buzz cut. 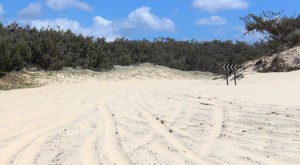 There is a great deal to see beyond Indian Head, including Waddy Point, The Champagne Pools and Orchid Beach Resort, not to mention Sandy Cape and the lighthouse. But the beach stops at the headland and starts again on the other side. To get to the other side it is necessary to negotiate a bypass track that is well known for its covering of soft. loose sand. We watched as the tag-along group and several other vehicles made multiple attempts to get 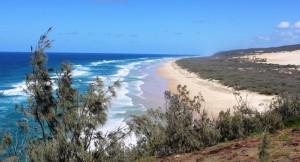 through the loose sand. All of them finally disappeared around the first turn and presumably got through, but not without considerable effort and further reduced tyre pressures. We decided that being on our own this was not our day to push on. We returned the 26 km to camp for lunch. 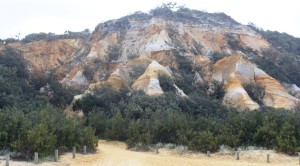 After lunch we travelled back south to Eli Creek, passing the wreck of SS Maheno, with its mob of admirers, on the way. We also stopped to have a proper look at The Pinnacles. They are a similar formation to The Cathedrals but have a quite unique formation. 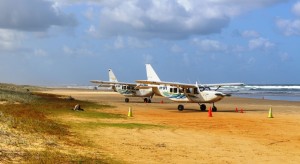 Aircraft parked near The Pinnacles 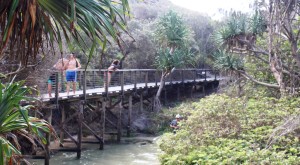 The top activity at Eli Creek is to walk along a board walk that parallels the creek for several hundred metres and then to enter the creek and wade, float or swim back to the beach. This must be fun because people, including some mature folks, repeat the performance over and over, despite quite low water temperatures. I remember swimming down the creek with the flow many years ago, but we gave it a miss this time.

Eli Creek is the largest fresh water stream on the east side of Fraser but seems to be now much smaller, with a reduced volume of water, that it was in years gone by. But the flow is reliable and much enjoyed by its admirers. Visiting family groups will often spend the day there,in the shelter of gazebos or roof rack awnings. Children love it as do parents. It provides an ever changing supply of safe clean water. But it often closes the beach to through traffic at high tide as the rising surf washes into the creek’s mouth. 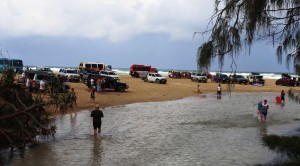 Any further thought of examination of Eli Creek was quickly dismissed when the day’s promised shower descended on us without warning, so instead of going on to Happy Valley we returned to base.

The large group mentioned earlier in the story went to Lake McKenzie for the day and were having dinner at Happy Valley on the way back, before returning to camp after the 7.00 pm high tide. They came in quietly a little after 9.30 pm. But preparing the evening meal was a breeze without them there.

I guess they are typical of groups who visit Fraser Island. The four ladies all teach as the same Sunshine Coast school and their children attend there too. One couple are seasoned visitors to the Island and seemed to ast as leaders on group outings. All friendly people with well disciplined children who made lots of noise while playing but went quietly to bed. They were probably exhausted.

5 thoughts on “Playing in the Sand – Fraser Island Part 2”