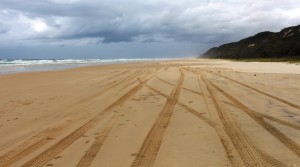 We just love driving on a wide flat beach 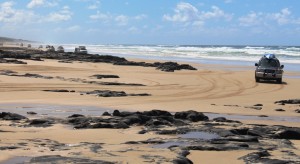 Coffee rock at Poyungan Rocks between Eurong and Happy Valley

We retraced our track down the beach for about 36 km to Eurong and then inland to Central Station and Lake McKenzie. This was our first trip on inland tracks, so it called for some different driving techniques to those required on the beach. Speed limits on the beach are generally 80 kph with 40 kph near popular and residential areas, but on inland tracks the limit is 30 kph so speeds are mostly less than 20 kph average. 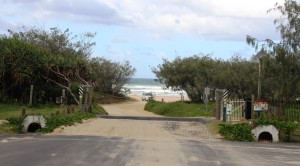 Eurong Village is quite near to the beach

We headed south, past a small crowd at The Pinnacles, past a larger crowd at the SS Maheno wreck and past an even larger crowd at Eli Creek. We were again forced onto the bypass track at Yidney Rocks where the waves were lapping at the coffee rock, making it impossible to drive by on the beach. Coffee rock is embedded in the sand and can be 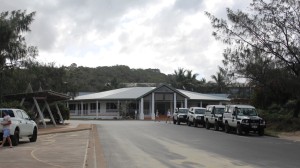 more or less exposed after a single tide. It frequently runs all the way back to the foot of the sand dunes.

There is not much to see at Eurong. The resort dominates the commercial area and is complimented by some shops. The town has a bakery, police station and fire station.  Most of the residential area is hidden in the 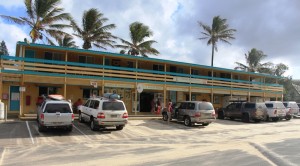 The main shop at Eurong

Most tracks in the area where we travelled were one way. Lake McKenzie is probably the most popular feature on Fraser, with Central Station not far behind, so the area attracts a great deal of traffic including tourist buses and tag-along groups. The tracks are narrow and winding so to meet a large bus on a blind corner can be rather frightening. The tracks are sand so become badly damaged, particularly in dry weather. A good deluge of rain washes sand into the deep holes thus improving the track. At the moment an average of 20 kph is the best that you could hope for and for much of the journey it was less. 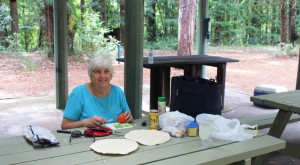 Central Station was the headquarters of the logging operation that werenpersued from the late 1800s to about 1950. Some historical artifacts are on display, including a logger’s cottage and a shed containing the artifacts, the walls of which are covered with pictures and text setting out the history of the early days, including Indigenous history. 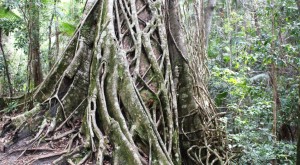 A Strangler fig at Central Station

There are extensive picnic facilities with tables aplenty, both exposed and sheltered. This is a favorite lunch stop for the tourist buses. 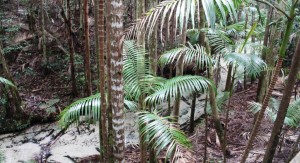 And then there is Wanggoolba Creek. Central Station was built on its banks, probably for the water supply. It’s almost clear water runs slowly over a bed of pure white sand that is tinged in places with the green of the mineral content in the sand, hence the sand mining in times past. Ancient green palms grow in its waters and its banks are lined with tall straight 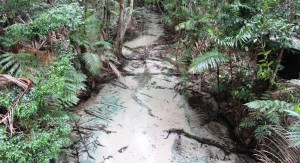 The creek photographed from the boardwalk

trunks of trees reaching for the sun and the natural debris that nature produces in this kind of environment. All this can conveniently be viewed from a board walk that is part of a loop track that starts and finishes at Central Station. 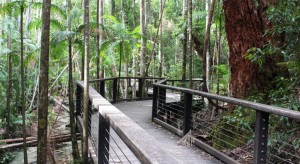 A section of the boardwalk beside the stream 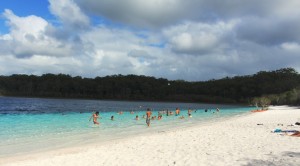 It is a further 11 kilometres to Lake McKenzie. In busy periods the large car park there is often filled before lunch time as visitors seek out this unique spot. Dingo management has lead to the banning of food lake side, but a large fenced picnic area has been provided. Visitors love the clarity of the water and somehow the pure white sand that surrounds the lake seems to invite sunbathing. 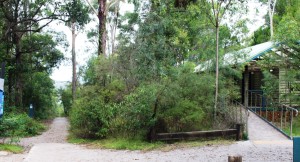 By the time we had spent a few minutes at the lake, the day was advancing. One thing that you can never forget, if the trip that you are doing requires much beach travel, is the state of the tide. Our target was to be home by 4.00 pm and the distance back to the beach at Eurong from Lake McKenzie is about 18 kilometres, probably at about 15 kph for a fair part of the way. We made it to Eurong at a few minutes after 3.00 pm. We refueled here, as 91 octane petrol was $1.85 per litre instead of $2.20 per litre at Cathedrals. 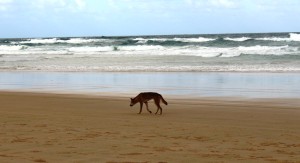 The 39 km run back along the beach took about 45 minutes but was interrupted early when, soon after leaving Eurong, we spotted a dingo trotting along the beach, near the edge of the water. We were able to drive up quite close to the animal. We were totally ignored.

We parked Cathedrals on Fraser at just after 4.00 pm but we would have been OK travelling on the beach for another hour.  High tide was at about 7.30 pm.

4 thoughts on “Playing in the Sand – Fraser Island Part 3”