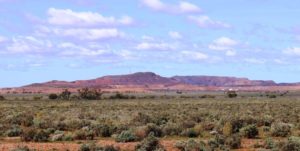 The water in the showers was little more than warm on our first morning at Mt Ive Station. On the second morning it was hard to tell the hot tap from the cold tap if judged by the water temperature. A check at the hot water donkey revealed an extinct fire and not much ash. The stoker had obviously fallen down on the job. Ruth and I made the best of it with a quick cold wash. When we drove out of the camping area we could see the stoker hard at work getting the fire going again. A grim faced lady in a pink dressing gown was marching up and down keeping him under close surveillance as she waited for hot water for her shower. 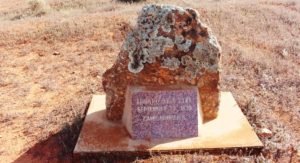 In returning to Port Augusta via Iron Knob we were retracing our steps, so did not expect to see anything new. But we were wrong. Not far into our journey we found a plaque advising that Edward John Ayer had camped for the sixth night in his exploration at a point near where the road now runs. He passed that way on 23rd September 1839. There was a picnic table nearby and a sign to advise that the table and plaque had been placed there by the Gawler Ranges Progress Association. Thank you GRPA. 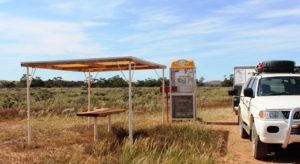 About 60 kilometres further on, the homestead for Siam Station stands a few hundred metres off the road. Beside the road, within sight of the homestead, stands a telephone box, next to a small picnic shelter. The shelter has a single piece table top sawn from a large log, but no seats. The phone is still in the phone box but it is not connected. Instead the coin box has been converted into two donation boxes, one for the Gawler Ranges Progress Association and the other for the Royal Flying Doctor Service.

The phone box is covered with bumper stickers from organisations with an interest in the area. There are also large stickers warning that the box is under closed circuit TV surveillance. We stopped in the parking area provided, for a coffee break, placed donations in each of the boxes and moved on. They are very practical folks in the Australian bush and passionate about the RFDS. There are no shortages of opportunities to donate. 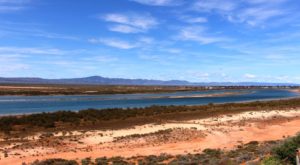 Before entering Port Augusta on our return we deviated north a bit to a lookout from a cliff top by the very top of Spencer Gulf, on the shores of which the town is built. The arid lands botanical garden is in the same area but we did not have time to visit there. But the cliff top parking area suited the dual purpose of a place to stop for lunch and a different view of Port Augusta. It also provides excellent views of the lower Flinders Ranges that extend well south towards Adelaide. 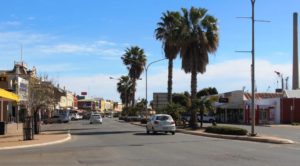 Part of the main street of Port Pirie

When putting out our awning at Mt. Ive, a vital bit broke off one of the handles that are used to slide the extendable arms that hold it the awning in the extended position.  The result was that we could not fully extend the awning, not a good situation in wet or hot weather. To replace the handle was a bit of a priority. We were not able to source one in Port Augusta but did 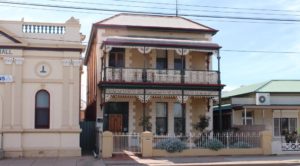 A stately home in Port Pirie

locate one at Port Pirie, about 90 kilometres to the south. So instead of heading for Quorn, a small town in the Flinders Ranges just north east of Port Augusta, we continued on, picked up our handle and proceeded to a local caravan park to spend the night and make the necessary repairs.

Quorn’s main claim to fame is that of its connection with the Pichi Richi railway. The steam  and vintage diesel trains that comprise the railway operate on part of the old Ghan railway line, to the south of the town, to Port Augusta. It gets its name from its passage through the Pichi Richi Pass, the gap in the range by which both road and rail reaches Port Augusta. Some trips start at Port Augusta and return later in the day, having given passengers a couple of hours to look around Quorn and have lunch. Other services start from and return to Quorn. The train operates at weekends and more frequently during school holidays. If you are relatively wealthy, you can book a ticket and go for a train ride for a couple of hours, or the best part of a day, depending on the service that you choose. If very wealthy you can book a seat on the lunch train, known as The Coffee Pot.

There must be a few wealthy people around as when we tried to book into the caravan park for a Saturday night stop over we found it to be fully booked, because the train was operating that weekend. As the caravan park is the only such establishment in town we opted to drive a further 70 kilometres or so to Hawker. Hawker was our next destination after Quorn, so we were not inconvenienced. We had intended to spend one night in Hawker and then move on further into the ranges. Hawker is built on a plain within the ranges. Mountains are visible all around but the town is flat. 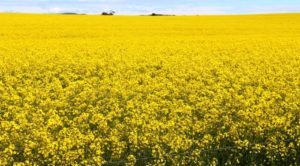 Canola in full bloom at the top of Port Germein Gorge

We made our way from Port Pirie through the Port Germein Gorge to Murray Town, then through Wilmington and Quorn to Hawker. The Port Germein Gorge is a very interesting drive. The road is narrow and winding and faithfully follows a stream that would be an interesting sight during heavy rain. Unfortunately there was nowhere to stop to take photos, so our passage through is unrecorded. But as we emerged on the eastern side of the range we were met by the yellow brilliance of flowering canola. This area is part of the Southern Flinders Ranges. 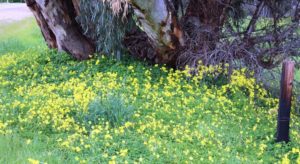 Rain was forecast and we found the start of it at Melrose, a small town with a pub beloved by bikers, that stands at the foot of the rather remarkable Mount Remarkable.  The rain was only showers but required application of the windscreen wipers from time to time. We reached Hawker at about the same time as the rain, although it did give us time to set up before it became heavy. But rain had been falling to the north of Hawker for much of the day, so all of the unsealed national park roads and most station tracks were closed. 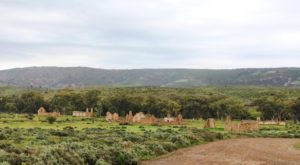 The rain cleared as Sunday morning dawned, but with so many roads closed we decided to stay at Hawker for two more nights to give them a chance to dry out. But sunshine and a brisk wind dried out some local roads quickly, allowing us to get out and see some things after lunch. Ruth had been busy with washing during the morning, battling with a clothes dryer that was reluctant to do its job. 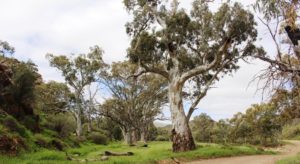 We drove east of the town in search of Willow Waters Gorge that appeared to be not far from town. But when we reached its apparent location we were only at the turn from the main road, with a further 14 kilometres to travel to the gorge. The road was solid with only a few puddles but we had to negotiate a number of cattle grids and a small flock of rams being herded along by a two stock men in utilities. We met them on the bay back and they hadn’t made much progress. 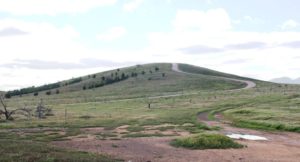 The road up Pugilist Hill. It is steeper than it looks.

After returning to town we drove up the road that leads to Wilpena Pound, turning just before the national park boundary into Martins Well Road, to find a lookout on the quaintly named Pugilist Hill. Martins Well Road leads 48 kilometres to a cattle station of that name but then, like so many station access roads in remote Australia, leads on to other destinations. 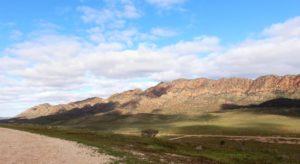 Part of the Chase Range from Pugilist Hill Lookout

Pugilist Hill Lookout provides a vantage point for viewing the Chase Range, one of the major and most picturesque ranges in the Flinders Ranges. It is long, with many peaks, its red rock mass forming one side of a long valley.  Vegetation struggles to maintain a foothold on its precipitous slopes. The Chase Range is at its best in afternoon sunshine but there were still clouds lingering, which spoiled the effect to some extent. But it was still awesome. As was the drive to the summit of Pugilist Hill, and the subsequent decent! 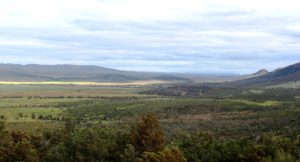 As a last activity for the day we drove about 8 kilometres west of the town to Jarvis Hill Lookout, another sharp climb from the plain. Unfortunately, attaining the lookout point requires a scramble over rocks and rough ground, so I didn’t walk the whole distance. But the view was good, although I could not see Hawker, but I did find more wild flowers that we had not previously seen.

We returned to the van as the sun disappeared behind the range that we had just ascended, to crank up the heater in preparation for another cold night. The temperatures have been around 13 to 15 during the day and often down to 2 or 3 during the night. The heater is frequently on all night.

Oh, and did I mention flies? We have been coping with them in increasing numbers since Rockhampton.