We awoke to the distant lowing of cattle, as yesterdays heard returned via the water supply to resume grazing on the road side, as they had been the previous day. It had been a doona night with the temperature down to 11C. The sun rose into an almost clear sky with the promise of warmth. 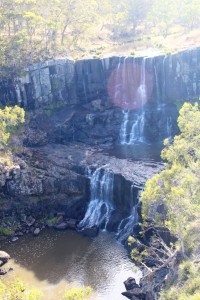 Upper Falls at Ebor Falls. Still some water in the Guy Fawkes River

Immediately after breakfast we unhitched the car and drove across the road to the day area at Ebor Falls. We have been here a couple of times before but a waterfall is always worth looking at. Rainfall through the area has been low by normal standards but there was a fair flow of water tumbling over the upper and lower falls on the Guy Fawkes River, just as it flows into the Gay Fawkes National Park within walking distance from the small town of Ebor. 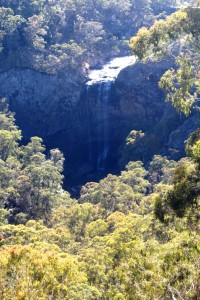 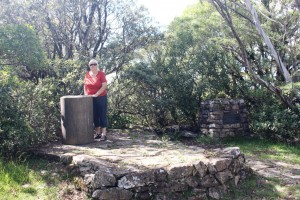 Ruth standing by the trig point at the summit 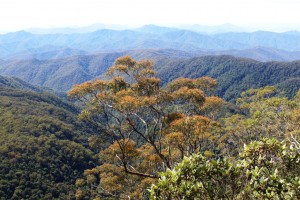 The view from the first observation point just below the summit

Point Lookout, a mountain peak of over 1,500 meters, is about 25 kilometres by road from Ebor. Previously, when we went there, we encountered a pea soup fog about 300 meters from the top and could see nothing. This is a common state of affairs as the lichen covered trees, scrubs and rocks attest. But today was different. We had struck a clear day. A short walk from the car park to a lookout was certainly worth the effort. 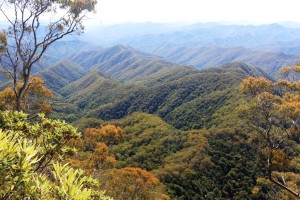 The view from the second observation point overlooking an adjoining valley

Spread before us was the most magnificent panorama of mountain scenery that we have seen in a long while. Range after range, divided by deep valleys and gorges, reached away to the distant Pacific which we could not quite see because of distant haze. Those northern NSW ranges are sure rugged! 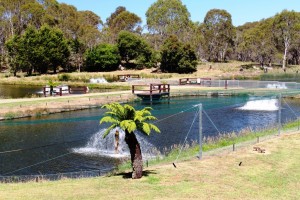 We had passed a trout hatchery on the way to the mountain peak and stopped in to have a look. We took the self guided tour, which started with an explanatory video and finished with a self conducted walk which included feeding the trout from a small bag of fish feed with which had been supplied. 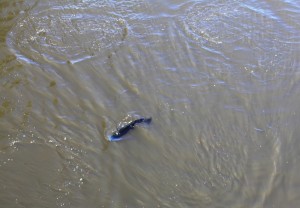 I would love to catch one this size!

When I go fishing the activity can reasonably be described as feeding the fish but then I feed them without seeing them. Although warm weather makes trout a bit sluggish there was enough interest to disturb the surface as large fish lunged at the pellets. Summer is a bit off season so there was not a lot going on but we left with an understanding of the process that provides the fingerlings that are used to populate the lakes and streams for the sport of trout anglers. 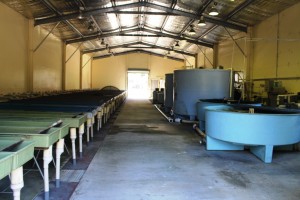 Processing centre for breeding eggs but not operating at this time of the year.

While there we bought some smoked and sliced trout. Does anyone have a loaf of very fresh bread handy?

Back at the van we had lunch, hooked up and headed for Armidale. We made two short detours. 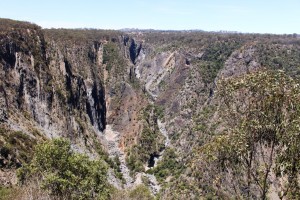 First a turn to the right to check out the tiny town of Wollomombi and a few kilometres later a turn to the left into the northern most part of the Oxley Wild Rivers National Park to check the Wollomombi Gorge. We would also have checked the Wollomombi Falls but lack of rain has left them without even a trickle. But the gorge is spectacular even without water.

The day turned out quite hot. Armidale recorded a top of 34C and it felt it. But just as we finished setting up for the night thunder sounded, to be followed by wind and rain. Storms have continued since then with another one passing as dusk settles. The overnight minimum is forecast to be 11C. Another doona night!