We had planned to take Judy and Alan with us on a drive into the Watagan Ranges for a picnic, but they had commitments that could not conveniently be changed, so we excused them and went by ourselves. We were following an established trek that included features of the Watagan National Park and surrounding state forests. This was another gravel road, and another opportunity to operate the Challenger in 4 wheel drive mode. 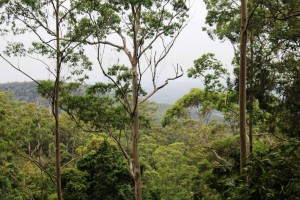 A roadside view through the trees

Our highest altitude during the day was around 550 metres so these mountains are dwarfed by those that we had visited over the last few days. The highlights of the trip were picnic and camping areas and lookouts. There are some areas of semi rain forest but the bush scenery was fairly ordinary. But on this last day before a long weekend the camping areas were filling up so it was easy to see the value of the area to residents of Sydney and Newcastle who are looking for an escape from city congestion.

There had been some rain so the dust was settled but had only produced a few wet spots. The road was in good condition with only a few washed out and corrugated sections. We crossed a number of ranges during the day so the drive was quite varied. As my beginnings were well and truly in the bush I love to return to it. I guess I am revisiting my roots to some extent. I think Ruth, brought up in the city, sometimes wonders what it is all about. 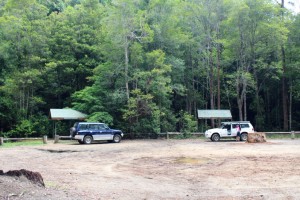 We stopped for lunch at Boarding House Dam picnic area. The facilities are set in a glen that could have been a small volcano crater. The stream was dammed many years ago to provide water for a boarding house that  accommodated timber cutters during early logging operations. We drove through regenerated and plantation areas not too far away. 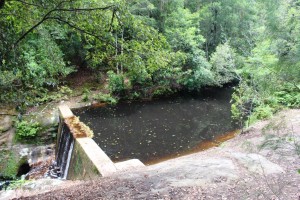 The small dam that gives the area its name 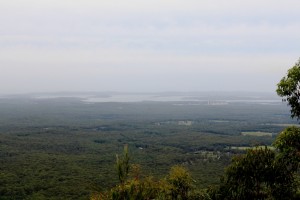 The view from Heaton’s Lookout

The last feature of the day was Heaton’s Lookout that provides sweeping views over the coastal lakes of the Central Coast of NSW. Unfortunately there was a great deal of haze so the view was not all that good, but worth the drive. 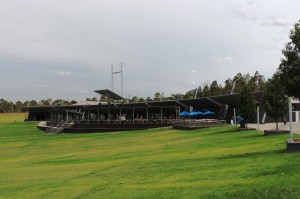 An impressive facility at Pokolbin

at the Hunter Valley vineyards. In the early years of our residency in Brisbane we often came through this area to avoid the congestion on inadequate roads. It was interesting to see the development and the money that has been spent on cellar door developments at some of the better known wineries. 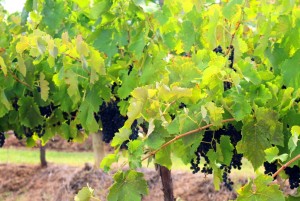 About ready to pick 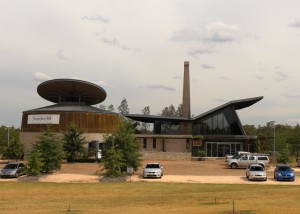 We paused in Cessnock for a cup of coffee before returning to the van along other familiar roads. We enjoyed a quiet evening but were awakened several times during the night by heavy rain. There would have been some very happy people as their parched gardens were watered by the persistent showers.