Monday dawned sunny, with a chilly breeze still blowing, but with the news that the road through Parachilna Gorge was open with caution at creek crossings. This made possible a loop of about 250 kilometres, past Wilpena Pound to Blinman, then to Parachilna with a return on tha Hawker Parachilna Road. 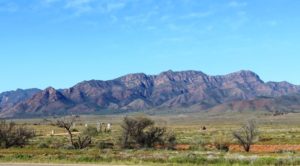 The Heyson Range from the Hawker Parachilna Road

This is a very nice drive, through the mountains to Blinman, through the Parachilna Gorge, crossing and recrossing Parachilna Creek and then south, travelling beside the western ramparts of the range. First, the Heysen Range, named for artist and Flinders Ranges lover Hans Heysen, is passed and then the Elder Range appears. It is named for Sir James Elder, grazier in this area and founder of the pastoral company Elder Smith, 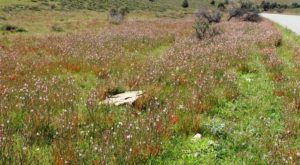 Carpets of colour beside the road

now known as the real estate operator called simply Elders. There is also a walking trail named the Heysen Trail that starts at Cape Jervis, opposite Kangaroo Island and ends at the road that runs through Parachilna Gorge. I believe that there are people who have walked its entire length. 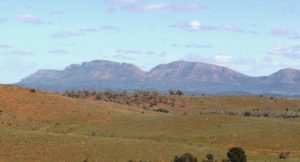 Mountains of the north wall of Wilpena Pound

At several points along the 107 kilometre drive to Blinman, observation points have been provided to view the wonders of nature. The road runs through the heart of the ranges and through the Flinders Ranges National Park. Not far along the way roadside parking areas provide good views of the Arkaba Hills and of the Elder Range. A bit further on, the road passes Rawnsley Bluff, one of the most prominent features of the area and part of the south eastern wall of Wilpena Pound. 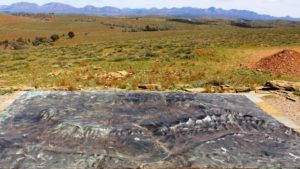 We bypassed the turn to Wilpena as we had plans to visit it as part of another activity. Not too far further north the twin elevated lookouts of Hucks and Stokes Hill provide panoramic views back over Wilpena Pound with Stokes Hill also providing views of the Loves Mine Range and The Bunkers to the north. At the summit of Stokes Hill a bronze diorama of Wilpena Pound has been placed so that it can be compared with the real thing.  As a combination of ancient and modern, visitors may connect their smart phones to WiFi to listen to Dream time stories. 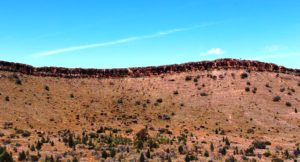 Part of the Great Wall of China near Blinman

Nearer to Blinman, two hills are crowned with natural stone walls, known as the Great Wall of China, because their similarity to their namesake. A short drive along a gravel track leads to a couple of elevated positions from which good views are available. As a bonus, the mountains that are behind you as you view the Great Wall are also worth viewing. 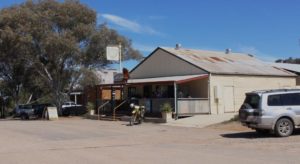 Blinman is officially the highest town, in terms of meters above sea level, in South Australia. In its heyday in the 1880s, at the peak of copper production from its mine, it had a population of 1,500. Now it has a mere 18 permanent residents. Its focal points are the restored mine office and conducted tours of the underground copper mine and of course, the meat pies available from the general store. We tried a couple of pies for lunch. They are much larger than city pies and are full of chunks of real beef. With a cappuccino each, they went down a treat. 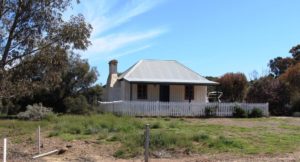 Blinman also has a pub, which is the most popular place for lunch. Four wheel drive vehicles, angle parked, lined the kerb on both sides of the road in its vicinity. Camping facilities are available in the national park, at private caravan parks and on numerous cattle stations, many of which offer four wheel drive tracks to their guests. So Blinman is a place to go for lunch and to top up supplies at the general store, which also offers a coffee shop. This is the source of supply for pies at Blinman. 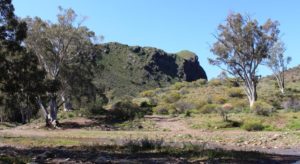 A view of a mountain on the Parachilna Gorge Road 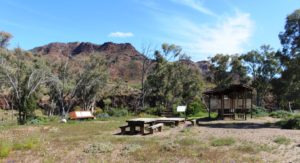 Facilities at the north end of the Heyson Trail 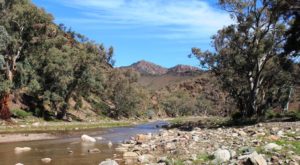 Parachilna Creek was flowing as a result of recent rain

The road on to Parachilna runs through Parachilna Gorge, following a creek if the same name. It is a pleasant drive on a winding dirt road that threads between spectacular hills and crosses the creek several times. On this drive the creek was running, but only a few centimetres deep. The road emerges from the gorge to run several kilometres across the northern Moralana Plain to reach Parachilna, located on the Hawker Parachilna Road. 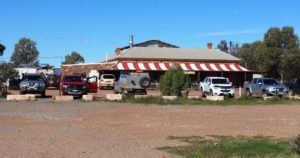 The Prairie Hotel at Parachilna

The town is located on the old Ghan railway line. Remnants of the rail service are on display by the old station building. The Prairie Hotel now is the town. It has achieved notoriety for the signature dishes from its restaurant.  The FMG (feral mixed grill) includes camel, emu and kangaroo meat. I am told that the cost of these delicacies is $38 per plate. The luncheon pies at Blinman now sound even better at $5 each.

But we did award Parachilna the title of Fly Capital of Australia! 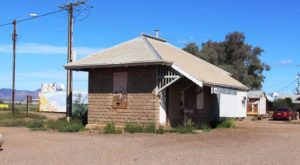 Part of the original Ghan railway station at Parachilna

The drive back to Hawker is about 90 kilometres of good tar. A pleasant journey, with the ranges on the left, bathed in the afternoon sun. On the way, we passed the western entrance to Moralana Scenic Drive. It that had been closed but had been opened with restrictions. It couldn’t have been too bad as a girl riding a bike and carrying all her camping gear peddled out of the road onto the highway as we drove past.

On the opposite side of the road is the gate to Merna Mora Station, which has been offering accommodation to travellers for many years. It offers powered van sites and station tracks that allow access to Lake Torrens, among other drives. So we called in and booked for the next three nights, but with fingers crossed that forecast rain would not upset the plan. 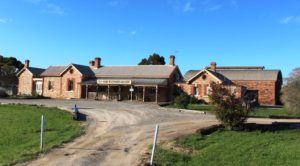 But it did. Heavy rain next morning closed national park roads and station tracks again. So we cancelled Merna Mora and booked another night at Hawker to see what would happen with the weather.