It was Friday morning 20th April and crunch time!

We had to decide if we were to go on or go home. After further discussion we agreed that the only responsible course of action was to return home. So we phoned our friends in Quorn to advise them of the changed plans. We are disappointed, of course, but disappointment is part of life. We probably won’t have another opportunity do Western Australian but another attempt at the Flinders Ranges is certainly a possibility. 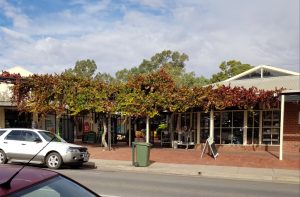 The Zest Cafe, where we have previously enjoyed coffee in Clare, is hidden behind the grape vines.

During our conversation, Graham told me that an on line acquaintance who we know through the ExplorOz web site and who Graham has met, works in Quorn. So before we left town Ruth and I called, met him and had a chat about matters of mutual interest. So another cyber contact has become a real person to us. 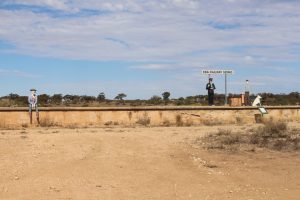 History is relived on this abandoned railway siding near Morgan, SA.

We departed Clare to the south, travelling through more vineyards until we turned east for Eudunda and then Morgan, on the Murray River. The run to Eudunda was mostly through more grain country with the area between Eudunda and Morgan mostly salt bush and Mallee scrub. At Morgan we crossed the Murray by ferry before following the river down stream to Blanchetown. 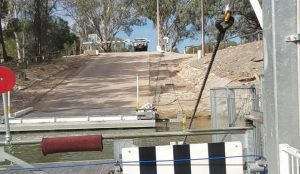 At the end of the ferry ride on the Murray at Morgan.

Crossing the river put us on the road that runs along the top of the river side cliffs. For much of its journey through South Australia, the Murray has cliffs on one side and normal river banks on the other. The cliff top provides great views of the river and surrounding agricultural areas. 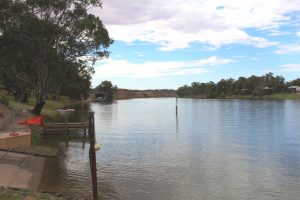 The Murray at Morgan, looking up stream from the ferry. 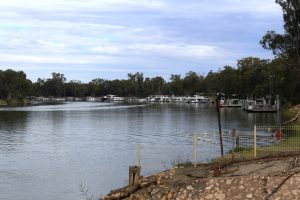 Blanchetown is at the point where the Sturt Highway that leads to Mildura crosses the Murray. We turned east and followed it to another river side town, Waikerie, where we spent the night. 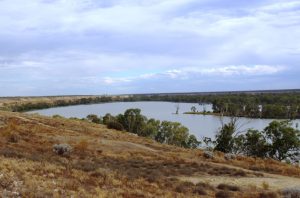 A view of the Murray River at Swan Reach

We plan to arrive home next Friday, so we need to travel about 300 km per day. So we set out for Euston, a small town on the Murray in NSW, travelling through the regional towns of Renmark, Barmera and Mildura.

There are areas of Mallee, fruit and grain, but grape production predominates. The facilities to process this huge harvest frequently appear by the side of the road. Some are large, with multiple storage tanks. I don’t know why, but the grape vines in this area are much greener than those even in the neighboring Riverland area of SA. It might be that the grapes here are different varieties. I believe there are more table grapes produced in the Mildura area, so that might be a reason.

Saturday night was spent in the Riverside Caravan Park in the small NSW town of Euston, just across the Murray from Robinvale.

Sunday produced another cool morning with heavy cloud cover in the west, but cleared to a brilliant sunny day with mostly light winds. The run today was from Euston to Narrandera. The Sturt Highway generally follows the Murrumbidgee River, but mostly at a distance. 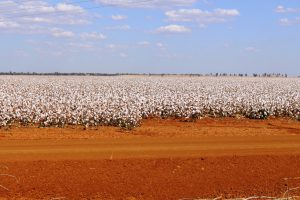 Cotton growing beside the highway

We were driving through grazing country, much of which has been turned to cotton production. Hundreds of hectares of cotton were in bloom with more not yet reaching that point. Large areas of adjacent land had been prepared for planting. Sunday traffic was light, with westbound caravans outnumbering the trucks. We wondered how many of them were heading off on the clockwise trip around Australia that we had so recently abandoned. 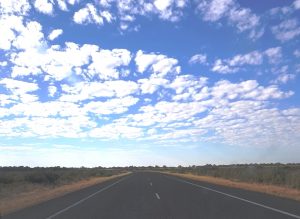 The Open Road. No emus here!

It was a rather ordinary day’s travel but there were a few moments of excitement when we had an encounter with a suicidal emu.

We had just been passed by a small car when an emu ran across the road in front of it. The car slowed and just missed the emu. The bird lost its footing in loose gravel at the edge of the road and fell over. It quickly righted itself and started to run back in our direction, parallel to the road. But it saw one last chance at suicide and turned into our path, shied at the sight of the front of the car and ran into the side of the caravan with a loud thump. In the rear vision mirror I could see a mass of flailing legs and flying feathers.

We quickly pulled off the road and stopped to see if it had survived but when we walked back it had gone. It must gave regained its feet and run away. It gives real meaning to the expression “tough old bird”. I had to perform a minor panel beating task as a result of the impact. 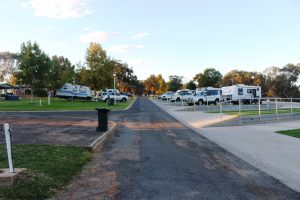 Parked on the hillside at Lake Talbot near Narrandera

We finished the day at the Lake Talbot Caravan Park at Narrandera, overlooking a section of the Murrumbidgee River where ski boat owners like to play. One boat gave us a small taste of what it is like on a busy day. We have previously been in this park on a busy boating day. It is not a time during which you can take a nap.

Monday and the start of another week. The destination today was to have been Wellington, to take us off the main highway, but we changed it to Parkes at morning coffee time. At lunch time, now at Forbes, we decided to press on to Dubbo but changed that to the neighboring town of Narromine when we realised that Dubbo would be full of school holiday makers visiting the Western Plains Zoo. We noted that caravan park fees were markedly higher than normal as a result.

Our path today took us past Ardlethan and through West Wyalong, Forbes, Parkes, Peak Hill and Tomingley, a total distance of about 400 km. We will give ourselves an easier day tomorrow. 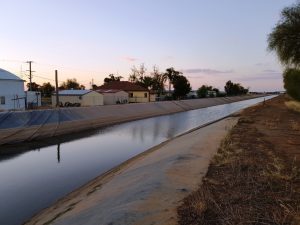 Narromine is a grain and grazing town of around 4,000 residents. Our caravan park is located on the edge of the airport, not far from the gliding base and the flight museum. Fifty meters away from where I am sitting a levee bank marks one bank of an irrigation channel. A little further in that direction the Castlereagh River flows, having made its meandering way from Dubbo.

We have driven through grain and grazing country all day. Like so much of the country that we have driven through on this trip this area is also lacking rain. But the further north we come the more farmers are cultivating their land to plant the coming season’s crops. Tell-tale clouds of dust were a common site today. 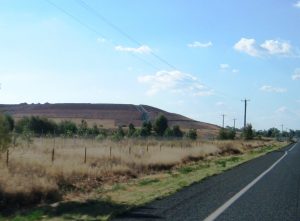 Gold mining at Tomingley near Dubbo

At Tomingley we drove between two huge piles of dirt on either side of the highway. The Peak Hill gold mine has ceased production. Now a substantial open cut operation is under way at Tomingley. 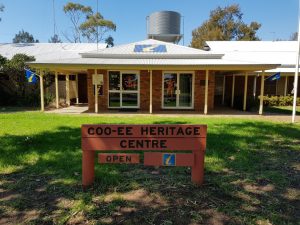 Tuesday 24th April was Anzac Day eave. After leaving Narromine and passing through Dubbo, the first town on our journey was Gilgandra, home of the Cooee March Memorial. In 1915 a small group of men left Gilgandra to march to Sydney to sign up to fight in France. As they marched through towns along their route they shouted “Cooee! Come and join us!” About 260 men did join them by time they reached their destination. Other recruitment marches followed, in different areas, during 1915 and early 1916. 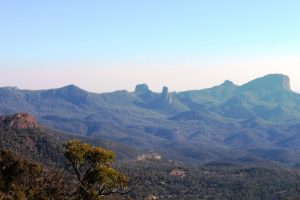 The Warrumbungle Ranges from the Observatory

We arrived at Coonabarabran at about 1.00 PM and booked into the John Oxley Caravan Park. We had decided to give ourselves time to visit the Siding Spring Observatory and the National Park. Time did not allow us to see the park, but we did make it to the observatory. 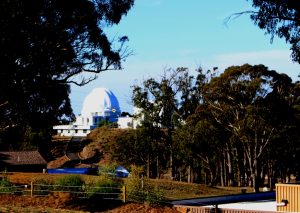 Another telescope at Siding Spring

Siding Spring is part of the Australian National University and associated with the Mount Stromlo Observatory in Canberra. The main telescope at Siding Spring is the Angelo-Australian Astronomical Telescope. There are 17 telescopes on the mountain, all with a special purpose. Many nations are involved, operating with a great deal of cooperation. 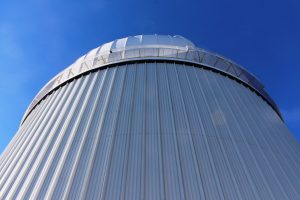 Looking up at the telescope dome from ground level

The first point of contact when you arrive at the top of the mountain is a visitor centre and a visitor car park. The visitor centre contains a series of displays that provide information to help visitors to understand what happens at the observatory and a shop that sells souvenirs and refreshments.

Behind the information centre, a path leads to the Angelo-Australian telescope, which is located at the very summit of the mountain. The dome covering the telescope can be seen from the Newell Highway south of Coonabarabran. 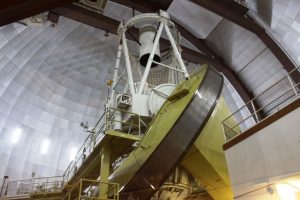 At the telescope, several flights of stairs, or an elevator, takes you to a viewing gallery where you can see and photograph the huge instrument. As it was day time it was not operating and the roof was closed. All observing is carried out at night. Daylight and artificial light are the enemies of the work that is done here and is a major reason that the Siding Spring location was chosen.

We returned to town to top up our food supplies and treat ourselves to fish and chips for dinner.

We spent ANZAC Day on the highway between Coonabarabran and Goondiwindi. There were more trucks sharing the road with us than the earlier days of the week, but most of the road today was over the plains of North Central NSW with much of it quite wide and easier to let faster traffic pass. 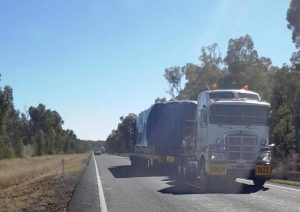 We didn’t see any signs of ANZAC services as we came along, but Narrabri and Moree were very quiet, as you would expect on a public holiday. The day was a complete contrast to what we had originally planned. We had intended to be at the dawn service at Villers-Bretonneau in France until our plans were wrecked by my encounter with cancer. April 24th was the 100th anniversary of the taking of that town by Australian forces supported by the Americans. My father participated in that attack as a Lewis machine gunner.

We spent the night at the Showgrounds camping area in Goondiwindi. Warwick tomorrow night and home on Friday! 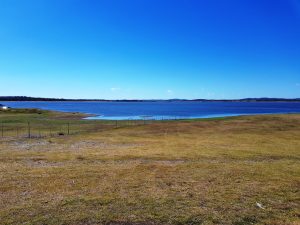 Thursday dawned sunny with a following wind for a change. This was the first morning for most of this trip where we didn’t need to use the heater in the van. Of course! We are back in Queensland!

The drive was unremarkable but we did leave the highway briefly to take our coffee break by the shores of Lake Coolmunda near Inglewood. We arrived at our Warwick caravan park at about 12.30 PM.

We had stopped for the night to visit Ruth’s eldest sibling, her Brother David and his wife Ann. We spent a pleasant afternoon and evening with them.

The last day was an easy drive. We arrived home at about 1.30 PM and set about the task of unloading the van and doing all of the other things that coming home entails.

We have arrived home about three months early with a sense of disappointment but also a feeling that we have definitely made the correct decision. We will do some other trips in Queensland during the winter months, probably to the north but not so far away that we can’t get to Victoria quickly. We won’t go anywhere, other than south, if Winston’s condition is seriously deteriorating.

Circumstances permitting, we will attend a gathering of members of the ExplorOz web site to be held at Kilcowera Station near Thargomindah in SW Queensland early in October. We may be able to combine another attempt at Flinders Ranges with that dstination. Blog readers will be kept informed. 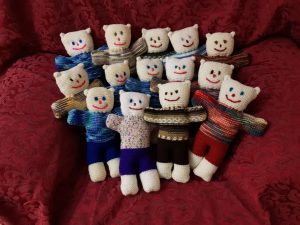 As is usual, Ruth has knitted as I have driven. The result is as pictured, twelve new comfort teddies, soon to be on their way to HIV positive children in Papua New Guinea.