We departed Kurrimine Beach on Saturday morning, needing to be home on the next Wednesday; with a little over 1,600 km to do via the coast and a bit more if we took the inland route. Inland won, as that gave us a chance to at least drive through the gem fields. We had intended to spend two or three days there. 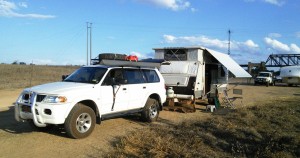 Ready for a quiet night

We left the Bruce Highway at Townsville and took the Flinders Highway, heading for Charters Towers. The revised plan was to spend the Saturday night at Macrossan Park on the east bank of an almost dry Burdekin River. Macrossan Park is a popular overnight stop, with flushing toilets and cold showers for the Spartan. 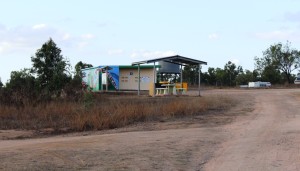 The camping area is between the highway and the railway, which is carried over the river by an impressive iron bridge. With the van set up for a comfortable night I went for a walk, to have a closer look at the rail bridge. Imagine my surprise when I found two rail bridges. It seems that many years ago the original iron bridge was replaced by a new bridge of similar design. The old one probably became unsafe, so a new bridge was built, just a few meters to the south. Once you know that the second bridge is there you see it straight away. But if you are expecting only one bridge then chances are that is what you will see, the structures are so similar. 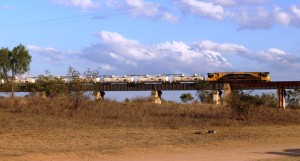 Queensland National obliged by sending a long fertiliser train over the bridge before dark and an other one after dark. There was at least one more during the night. The sun slid quietly behind the low range of hills that constitute the horizon, with a tinge of colour in the distant clouds which were rather a dark shade of grey. But the cloud 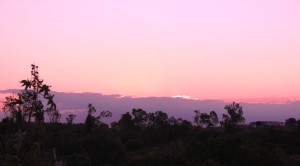 Tinges of sunset on the edge of storm clouds

vanished westward with the sun and left us with a full moon rising into a clear sky. 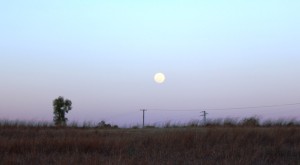 A full moon commences its assent 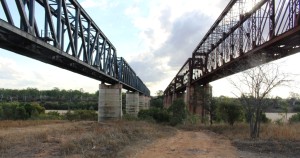 There really are two bridges

On Sunday morning, a short run brought us to Charters Towers, where we refueled for the run south through Belyando Crossing and Clermont to our next overnight stop. Quite early in the trip we started to see signs of recent reasonably heavy rain. There looked to have been enough rain to put a smile on local farmers’ faces. When we crossed the first range from the coast the previous day, we could see how dry it was. That amount of rain would at least have brought some relief for beleaguered farmers. It certainly explained the grey clouds on the horizon the previous evening.

The Gregory Developmental Road passes through a mix of flat and undulating grazing country on its way through Emerald to Springsure, where it becomes the Dawson Highway, but we were not going that far. We refueled at the Belyando Crossing Roadhouse and continued on into the coal mining area of Clermont where we turned onto minor 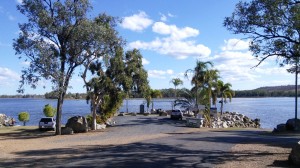 roads to reach the caravan park at Theresa Creek Dam, about 25 km to the south west of the town. We noticed that one long coal carrying conveyor that was working when we came through this area last year was now stationery, a victim of the slowdown in coal exports, probably.

Theresa Creek Dam has been there for many years with a recreation area for locals on its banks. But in recent years the local council has developed what was formerly an informal camping area into a comfortable caravan park. We lined up with other vans in the overnight area, but at a comfortable distance from our neighbor.  But not for enough away not to hear our next door neighbor’s generator. Peace was restored when it was turned off an hour later but we had spent that time walking about the caravan paek, so were not really inconvenienced. 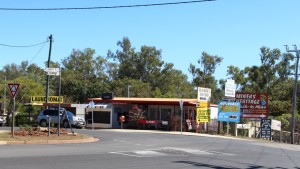 After another peaceful night we moved on for our drive through the gem fields. It wasn’t very far, probably about 50 km and we were parked in Rubyvale. Gem mining towns tend to be a bit of a shambles, due, I think, to the kind of people who become gem miners and the limited means with which they initially ply their trade. 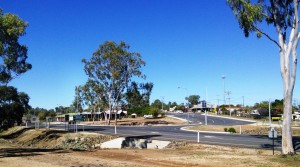 Rubyvale, however, has a very orderly centre with a general store, post office, caravan park and a new gem display and sales gallery that also houses a stylish coffee shop. There were not many gems in the gallery priced below $1,000 but the commodious coffee shop, probably built with the tourist coach trade in mind, had very affordable Devonshire Tea (or coffee). We also bought a small bag of washed gravel to put aside 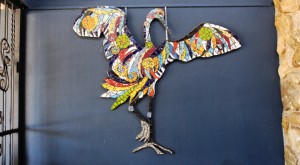 Decorations on the coffee shop wall

for sieving with our granddaughters at some suitable time. Perhaps we are sitting on a fortune. And perhaps not! But we may find something worth cutting and mounting into a piece of jewelry.

Coffee and scones consumed, we continued on to Sapphire, another ragged town with a less orderly centre than Rubyvale, but it’s town centre is clearly older. After a look around we continued to the 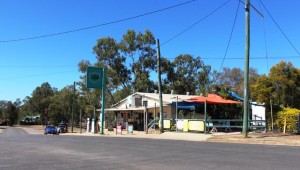 Capricorn Highway and then to a lunch stop at Emerald.

At Emerald we were back on the Gregory Developmental Road for the 56 km to Springsure. It was now a matter of how much further we went that day. We had in mind a river side camp where the Dawson Highway crosses the river from which it takes its name, but the caravans already there appeared to have been inserted by a sardine packing machine. We continued a further 20 km to the largely deserted caravan park in Moura. It is a large park, mostly of motel units and cabins for mine workers. 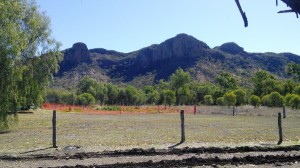 Our site was adjacent to a very noisy Coca-Cola machine that seemed to be trying to freeze its contents. We didn’t check. It was more of a night for hot drinks in this Central Highland town, the sleeping part of which we spent under a doona.

Home was now not much more than 600 km away with two days in hand, so we had the option of spending another night on the road or go for home. I find that these kinds of decisions take care of themselves. As the day progressed it was resolved in favor of going for home. We took a mid morning break at Monto, lunch at Ban Ban Springs and as the afternoon wore on stopped at Kybong, south of Gympie, for a very large container of caffeinated coffee and a serve of crisp hot chips.

So that brought us to the end of 37 days of fascinating adventure. Before we left home I had read a comment on Facebook where someone had remarked that a trip to Cap York was more an adventure than a holiday. That is one reason that I called this series of posts our Cape York Adventure. It’s both, really. Whoever said that you can’t have an adventure while on holiday? 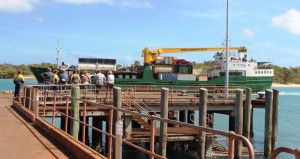 The opportunity to return by ship was pure luck, but the experience added greatly to the memories. I don’t mind driving on rough roads as we have the equipment to handle them, but I don’t go looking for them. If there is a choice of a sealed road that doesn’t take me too far out of my way I will opt for it every time, but there are iconic remote dirt roads and I get a great sense of satisfaction successful driving them. 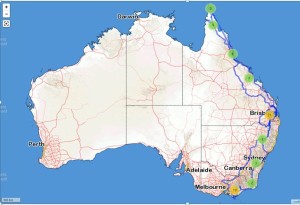 I have mentioned previously that we track our movements using a satellite tracking device. This provides a recorded track that can be superimposed on a map. I had a look at ours the other day, only to realise that  we had literately travelled from one end of the country to the other during the last twelve months. In the dying days of 2014 we were at Wilson’s Promontory and less than a month ago were at the tip of Cape York. Here is how it looks on the map. 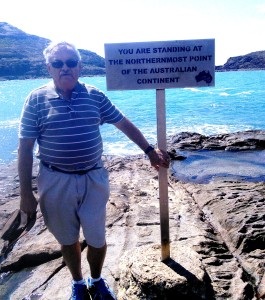 So, until next time, thanks for coming along with us to the Tip.