I expect Tenterfield had a dawn service today so I hope those attending were well rugged up. It was only  7 C at sunrise. As we left town, just before 10 am, spectators were gathering to watch the ANZAC march. As we reached the edge of town we met an original US army Jeep, still left hand drive, driven by an old gent in his Sunday best with the windscreen laying flat on the bonnet, like any self respecting soldier on a cold morning. 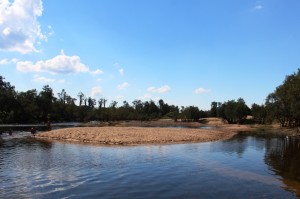 Sand banks in the Upper Clarence

And talking of small towns, Jackadgery is really only a caravan park, without a town at all. 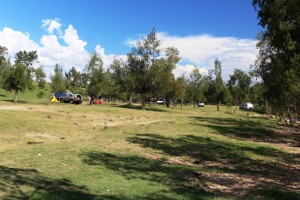 Day use and camping area beside the Clarence

The Clarence Way leaves the highway by a sharp switchback turn onto a badly corrugated gravel road. But not for long, as we were almost immediately confronted by a road closed sign. A bridge is under repair 12 kilometres along. So we had to retrace our path about 10 km to another road that was the official detour. It was sealed for the first 25 km. Just before this detour rejoined Clarence Way, it crosses the river over a low brige at a place that is used by locals as a recreation area. There were a number of campers and picnickers, with children playing in the shallows and kayaks on the bank. We stopped there for lunch.

The road from here was mostly gravel with some sealed areas, mostly in places where the road would be likely to flood.

We were driving through country that alternated between bush and farmland. At one point we came over the top of a hill to overlook a large event involving horses and cattle in a flat area between the road and the river. Camps had been established and there were yards and enclosures that probably belong to a cattle station. We met several horse floats heading in that direction. Probably a long weekend event.

As we travelled, cloud had been building and it became darker as the day progressed. At one point we drove on wet road with a few drops of rain on the windscreen. By the time we reached Jackadgery it had started to rain as a storm came over. But we can’t complain. The weather has been perfect. 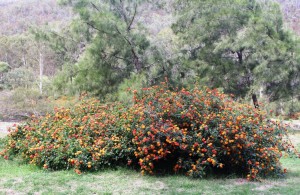 The lantana is in flower

Our reason for coming to Jackadgery was to drive the Old Grafton to Glen Inness Road. From its official opening in 1867 until the Gwydir Highway opened in 1964 this road was the only way to travel between the Grafton area and the region beyond the Great Dividing Range. With the completion of the new road up the Gibraltar Range the old road became simply a means of access to rural properties and national parks. 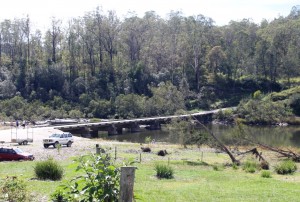 Buccarumbi Bridge over the Nymboida Rover

In more recent times it has become more of a tourist Road as word has spread of the magnificent scenery and significance of historical items along its path. The full length of the road between the two centers was about 170 kilometres but the section from where it leaves the Gwydir Highway near Grafton to where it rejoins is 128 kilometres. Our loop from Jackadgery towards Grafton, along the historic road and back to Jackadgery was 260 kilometres. 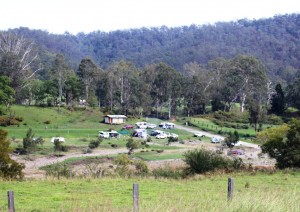 From the Grafton end, the first 30 km is typical narrow country sealed road. The road then becomes narrow gravel but it is generally in good condition and a fairly easy drive. Two wheel drive vehicles are adequate in dry conditions but 4WD a necessity if very wet.

The gravel road leads into the Nymboida Valley. Very soon you reach the Buccarumbi Bridge over the Nymboida River. This is a popular camping spot with almost every bit of flat ground playing host to a tent, caravan or camper trailer. 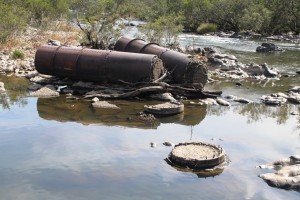 Piers and foundations of a flood destroyed bridge

The upper reaches of the Nymboida are popular with white water enthusiasts but the lower reaches, including after it flows into the Mann River, is more suitable for canoe and kayak touring. The 40 km distance can take 3 to 4 days and is popular with school groups. The proprietor of the Jackadgery Caravan Park provides a service by which he transports groups with their boats to Buccarumbi Bridge thus solving the problem of how to get your vehicle back. He also rents canoes and kayaks just to make it easy. Is anyone interested? 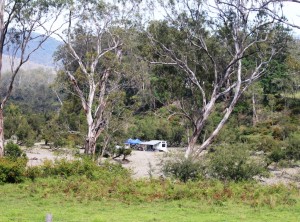 Solitory camper by the river

From this point the road follows river valleys, only taking to the high country to cross to the next valley. For much of the distance the road clings to the hillside just above the stream. Our direction of travel placed Ruth rather precariously on the edge of the road when we met an oncoming vehicle. This happened frequently. Most people want to be next to the bank so they were coming the other way. 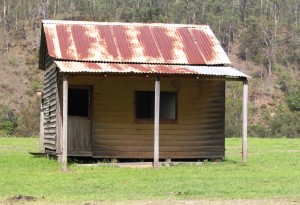 Only a butchers shop (closed) remains of the old gold mining town of Dalmorton on the Boyd River. Like so many similar towns, Dalmorton grew rapidly, only to diminish as quickly when the gold ran out. Some kind Government department has built a large covered picnic facility, which had been commandeered by a camera club who were keeping pace with us. We moved on and enjoyed a solitary lunch beside the pristine Henry River, a little later. 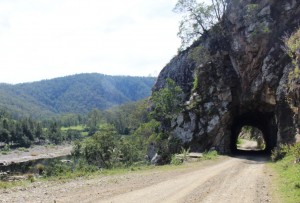 The tunnel by the river

Not far past Dalmorton a stubborn buttress of rock runs to the very edge of the river. Not to be thwarted, the road builders simply dug a tunnel through it. But this was 1887 and they dug it by hand. It is one vehicle wide and of adequate height. A small caravan would fit through its 90 metre length. It is a fascinating piece of early Australian history. 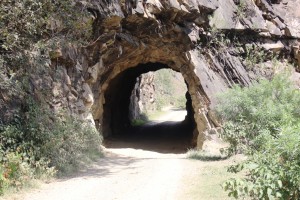 The tunnel from the other side 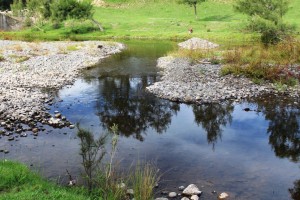 The Henry River at our lunch stop

I have lived on a farm, but this was the first time I had really watched a 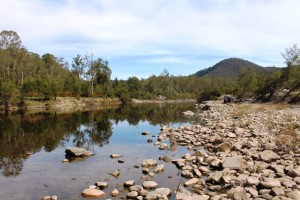 Finally we reached the Mann River and after a few kilometres along its banks we came to the camping area at the Mann River Nature Reserve. A good spot, as national parks go and well patronised by campers. The river is interesting 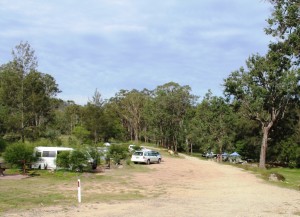 here as it flows through a small gorge and over huge flat rocks.

Immediately you leave the camping area you pay the price for the easy gradients on the earlier parts of the road. In a climb of about 6 km you gain over 600 meters in altitude. It is quite a climb.

A few years ago, in a Glen Inness caravan park,we met a couple with a van but no obvious car. They had 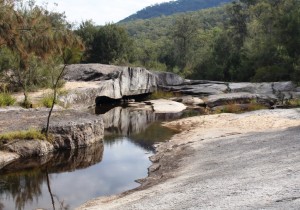 Small gorge and river bed on the Mann River

blown a gear box towing up that incline. After climbing it, with nothing in tow, I can understand why. So to check out a suitable place to park the van in the area, as we returned along the Gwydir Highway, we drove 3 km into the Washpool National Park and found the Bellbird Camping Area with good accommodation for our size of van.

We continued to the top of the range and made our way down the twisting road back to the Mann Valley particularly enjoying the run beside the Mann River.

The evening was cool and we spent much of it sitting around our neighbour’s camp fire, getting to know a young family who we will probably never see again. Of such experiences are memorable trips made. 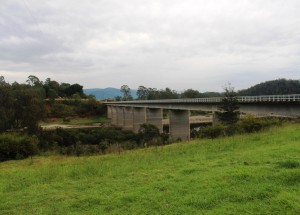 Bridge on the Mann River at Jackadjery

We had planned to return home on 28th, hoping to spend out last night near the ocean. But the storms returned and clearly were to persist, so we kept on driving until we reached home, arriving at about 5.30 pm.

It had been an enjoyable few days. We covered  some new territory, saw new sights and met new people. Towing on gravel gave no problems. Very little movement in the contents of the van even on rough sections. No breakages and no dust inside the van even after quite dusty sections.  All good! We expect much more dust on our next trip.