Please Note: A link to a short video covering the material in this blog post is located at the bottom of this post.

You may recall that last year we set out on a second circumnavigation of the Australian continent, but our plans were disrupted by medical imperatives. Expert medical intervention has either fixed or deferred the problem. Time alone will tell.

So on Monday last, 19th March, we set out again. Our initial objectives are Sydney and West Gippsland, albeit in an indirect manner, but the detail will be the substance of the story. Hopefully the track will lead to South Australia, Western Australia and those parts of Northern Territory through which we must pass to come home.

We have travelled, and blogged, the East Coast sufficiently to render another journey along it as no more than a commute, so comments about this early part of the trip will be restricted to the highlights.

We reached Grafton on the first day and pulled into the basic caravan park associated with the Grafton Greyhound Club. Monday night was a race night, so we arrived as part of a procession of greyhound trailers and vehicles with dog carrying capabilities. 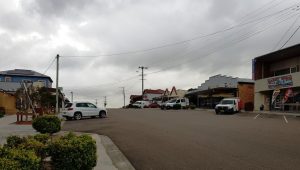 The main street of Bulahdelah. I remember it differently.

Payment of camping fees entitled us to watch the races and use the bar and canteen facilities. Instead we went to bed. After spending Sunday packing the van and then finalising everything and driving about 350 kilometres today, we were bushed. Lights out was before the last race. We slept through the race calls over the PA and the departing traffic, much of which drove right past our camp spot. 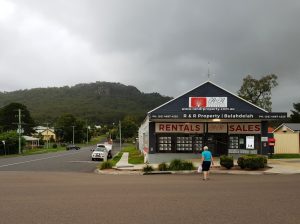 We spent the next night at my old home town of Bulahdelah. We intended to stay at the free camp by the river but when we arrived it was packed out, so we moved on to the caravan park. Our arrival had coincided with the annual run to the top of the Bulahdelah Mountain. This is an annual event, apparently. It was only Tuesday but folk were already there for the weekend run. I always knew the mountain as the Alum Mountain, as deposits of alum were mined there long before my time in the town. We were always

told that it was the only alum mountain in the world, but I have no proof of that claim.

The weather forecast was ominous with heavy rain predicted. We experienced a couple of showers but the real rain started as we moved on towards Newcastle for a call for morning coffee with brother Ivan and his good wife. The sky opened and at times we almost needed to stop. The deluge paused for our social call but returned as we drove on to Sydney. But again it ceased as we arrived at our caravan park to set up for the night. Arriving and departing caravan parks in the rain can be a very miserable business. 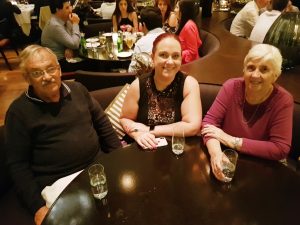 Well satisfied after a sumptuous meal

Visits to Briony in Sydney usually involve a memorable dining experience and this time was no exception. We only stayed over night so met her in the City for dinner. She booked us into the Glass Brasserie at the Hilton Hotel in George Street, for 6.00 PM, because she knows that old people eat early. But the decision was influenced by the policy that bookings before 6.00 PM get half price.  And that helps, because it is one expensive eatery.

Despite the substantial discount, no short cuts were taken by staff. We were treated in the same manner as all the diners who arrived later and presumably paid full price. The service was superb and the food exquisite. My King fish sashimi entre and lamb loin main was beyond description. Ruth and Briony shared my opinion in respect of their meals. A cheese platter to finish ensured that we didn’t go home hungry.

Again, fine weather to pack up in Sydney but more heavy rain as we made our way to Wollongong. Briony has a school and current friend who runs a coffee shop in a suburb 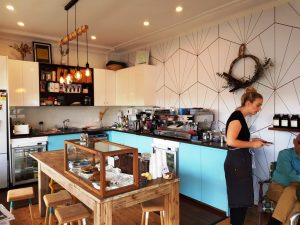 of Wollongong near the highway. We have been there once before and enjoyed the experience so much that a repeat visit was almost mandatory. The concept on which the place is based is “come into my kitchen for coffee”. The shop is one room with the coffee and serving facilities along one wall, the food is displayed in a display case on a table in the centre, with the clients seated around the walls or at part of the table. The locals love it. By the time we arrived at about 11.30 AM most of the food was gone, but what remained was of the normal high standard. The cakes are mostly sourced from home bakers.

We have known Lucy for almost as 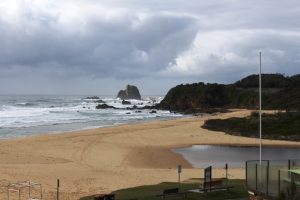 Ocean view from the caravan park

long as Briony has so we did enjoy the visit.

More rain as we drove through the lush green countryside of the Illawarra area towards our still undecided destination for the day. At about 5.30 PM we rolled into Narooma and chose a caravan park with quite lovely views over the ocean. But it was a bit grey. 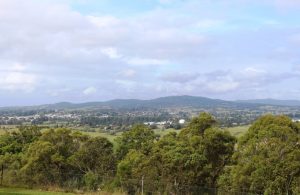 A view of Bega and the Bega Valley. The home of Bega cheese.

Day 5, 23rd March. We made a late start, fuelled up and headed on south. Our destination today was Bombala on the south east corner of the Monaro tableland. The shortest route would have been to turn onto the Snowy Mountains Highway just north of Bega, but instead we continued south to the coastal town of Pambula where we turned west into Mount Darragh Road. This alternative route provides a much gentler ascent of the Great Dividing Range and 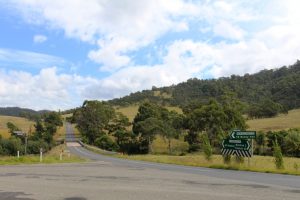 delivered us to the very doorstep of Bombala. We selected a snug site under leafy trees beside the Bombala River. Lots of leaves also on the ground were testament to the season and relative to the predicted overnight temperature of 10 Celsius.

We have a planned activity for Saturday but it is rather weather dependent. 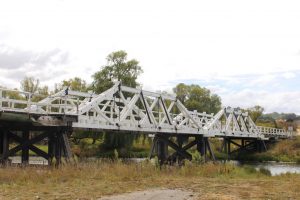 A quaint bridge near Bombala

The early morning sky was mainly blue with a rising sun reflecting on the edges of some scattered clouds. Mist drifted up from the river and lay in low areas. 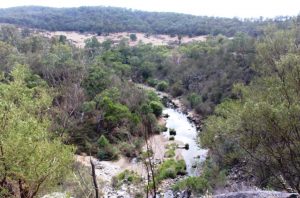 The forecast was for some rain but, with sunny periods and a top of 24C. So after a leisurely start we set off for McKillops Bridge, a drive of about 125 km to the upper waters of the Snowy River. The drive took us briefly into Victoria. Today’s trip is another in the “Things Kevin Did In His Youth” series. I last saw McKillops Bridge about 57 years ago. The trip took place before Ruth and I were married, while I was working in Morwell. 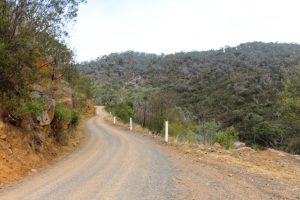 A work mate and I set off after work on a Friday afternoon, mounted on our step through Vespa motor scooters and loaded with food and sleeping gear for a long weekend. We camped late at night near Nowa Nowa and rode on to Buchan next morning. After looking through one of the caves we continued north on the road that leads to Jindabyne, but turned east before

reaching the NSW border, towards

Delegate and Bombala. It was on that road we discovered McKillops Bridge. We were amazed to find such a structure in the middle of the bush. A very substantial bridge was needed to span and withstand the Snowy River’s floods, to provide an all weather road. It remains a tourist attraction to this day. 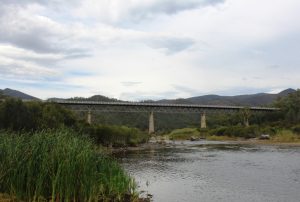 Pioneer squatter George McKillop, crossed the Snowy River at the place where the bridge now stands, in 1835. He pioneered a cattle route that was used to stock new grazing properties in the Snowy Mountains. Cattle to stock other parts of the Colony of Victoria also travelled via that route. Construction of the bridge was commenced in 1931 and was completed by January 1934, in time to be washed away in record floods, before its official opening.

So back to the old drawing board! 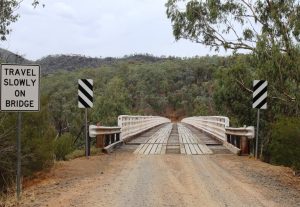 About to cross the bridge

The concrete pylons were made higher and a new deck constructed. The rebuild was completed in 1936. The road and bridge were important links between Victoria 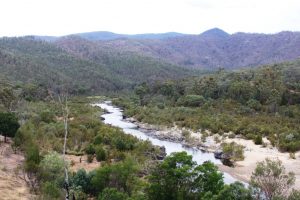 Down stream view of the Snowy from the bridge deck

The road that we took today is the same one that we travelled that day, as we continued our journey. It is the Bonang Gelantipy Road and intersects with the Bonang Highway about 58 km south west of Bombala. The road is in very good condition and a good width most of the way but has some narrow mountain side sections. On the way in we only met one vehicle in the 65 km of mostly gravel winding road. There was a bit more activity at the bridge, including four motorbikes that we had seen roadside on our way in. We met a few vehicles on our way out, but this is lonely country.

The photos will tell the rest of the story. 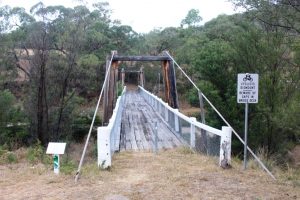 We found another bridge of historical significance. The Ambyne Suspension Bridge was built in 1935, partly from material salvaged from the flood stricken first McKillops Bridge. It is now, after restoration, for pedestrian use only, but more importantly, to preserve an example of the construction method developed by the Victorian Country Roads Board for use in that state. The bridge was closed to vehicular traffic in the late 1970s. 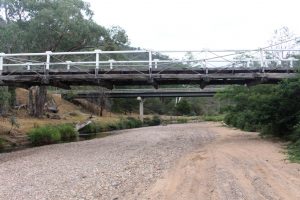 On our arrival back at the caravan, it was evident that a decent shower had gone through in our absence. Rain started again at dusk.

It rained overnight but again was fine for us to pack up. But our run of luck ended when we arrived at Marlo, the small town at the mouth of the Snowy River. As we drove onto our site at just after midday a squall blew through with strong wind and heavy rain. We took refuge in the van and had lunch while we waited for it to blow through. We are here for two nights. Cold wind and rain are predicted. But it is cold everywhere. 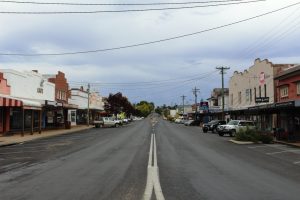 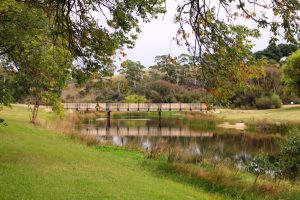 Footbridge over the Bombala River in the bicentennial gardens 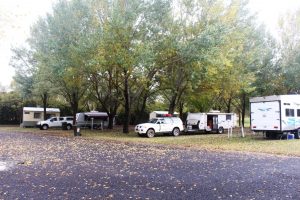 Hitched up and ready to roll at Bombala caravan park

Which is why we are here and not at Adaminaby, as planned. Overnight temperatures on the coast will be down to 10C for the next couple of mornings. On the other side of the range they are forecast to be much lower. And that raises the prospect of icy roads, not something that you want when towing a caravan. But we are not yet finished with the mountains. After a lay day here we will turn back inland for a couple of days. Temperatures are forecast to be on the rise. Possibly Up to 26C on Thursday.