The Sheathers are mobile again. Ruth’s knee has responded to physiotherapy and the orthopaedic surgeon has given approval, so we have grasped a brief window of opportunity to get away before commercial responsibilities demand my presence in Brisbane. Then, of course, someone decided to call an election for 7th September thus reducing the size of the window by a few days.

This trip takes us up the coast, almost to Townsville and then to Charters Towers and around two sides of the Dinosaur Triangle, including Hughenden, Richmond and Winton. Then we plan to move through to Longreach, the gem areas of Sapphire and Rubyvale and finally home.

Because much of the area is very familiar to us we will be driving straight through much of it to reach the areas of interest. It is mainly about these areas that I will blog.

For years we have promised ourselves a whale watching cruise and although we had encountered a couple of whales while sailing in The Whitsunday Islands a few years ago we had never been up “close and personal” with them. So the first two nights of our trip were booked at Hervey Bay with a whale cruise booked on the intervening day. 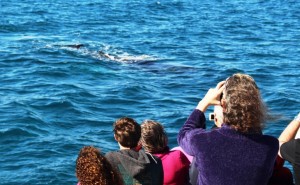 There they are. just under the water.

It is easy to feel at home in Hervey Bay. God has several waiting rooms in Queensland and Hervey Bay is one of them. But this weekend it was all “Go” as the Whale festival was on. But we didn’t see much of it because while others were parading the streets we were out on the water actually looking at what the shore based folk were celebrating. 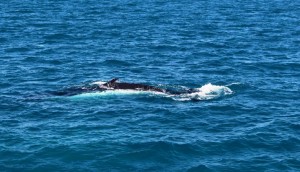 We sailed on the “Tasman Venture” and are pleased to report that it ventured nowhere near the Tasman. But it did venture to Platypus Bay which is the long sweeping expanse of sheltered water off the west coast at the northern end of Fraser Island. Whales come in to Hervey Bay as part of their breeding pilgrimage from cold Antarctic waters to the warmer waters of the Coral Sea. 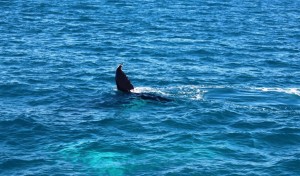 A strong southerly current runs down the east coast of Australia, often reaching speeds 4 knots and more. The whales have to swim against it as they travel north. I have sailed into that current from Sydney to Brisbane and you certainly know it is there. So it makes sense to me that the whales would turn into Hervey Bay for some respite from the persistent current. 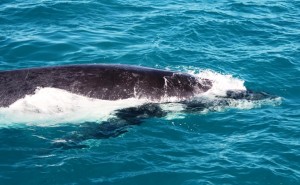 Here is a better view!

There were sufficient of them in the bay for us to find and spend time with three pods, two of two and one pod of three. Once you have two whales you have a pod. There can be more than two in a pod, of course. 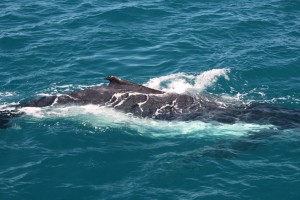 They are being cooperative today!

From the first sighting excitement on the boat was obvious. There were around 60 passengers and as soon as the sighting was announced there was a rush to the bow. The Tasman Venture is a substantial catamaran but the shift in human weight caused the bow to drop and the stern to rise but we did not join the whales below the water. But the whales certainly joined us on the surface and gave every indication that we were welcome in their domain. 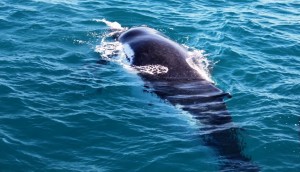 Pods one and two behaved a little differently at first but then settled into common behaviour patterns. There was much surfacing, venting, rolling and diving and heads popping up to take a look around. The skipper kept moving the boat so that everyone could see but the whales swam from side and from front to back, often swimming right under the boat. 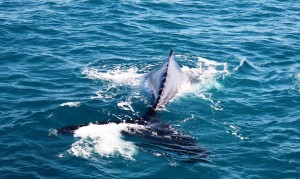 Swimming away from the boat.

Show business folk say that you should always leave your audience wanting more. Well this audience certainly wanted more and wanted it all afternoon. And we got it. 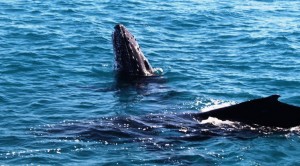 What ever is going on? Whales often take a look like this.

The third pod contained a seasoned showman. He was the largest whale we had seen, probably full grown, and must have been there before as he knew how to please the crowd. Whales have large fins on their sides called pectoral fins. On a large whale they weigh about a tonne. The showman whale repeatedly struck the surface of the water, sending up showers of spray and continued to do it time after time – almost like a child splashing in the bath. 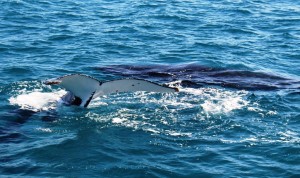 The under side of a whale’s tail. 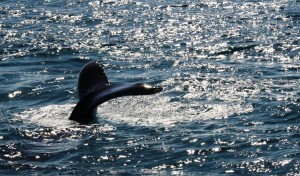 Top view of the tail.

Then, with sunset approaching, he appeared to lose interest and started swimming away. The skipper, thinking that the show was over, started to open the throttles on the boat. The increased vibration seemed to warn the whale that he was losing his audience because he dived and breached. A breach is when the whale throws their body almost right out of the water. But he continued with his performance completing about ten breaches in succession. It truly was awesome! 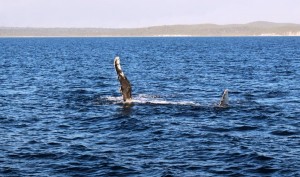 Even the crew were impressed. We heard later that other boats had seen more whales than we did but none that we heard of were presented with the show that we had enjoyed.

It was about an hour’s run back to port through the deepening twilight. We watched the sun set over the land and the lights of Hervey Bay become brighter. The crew served 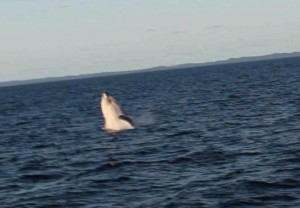 The start of the breach action

drinks and nibblies to help pass the time but there was lots of conversation as passengers discussed what we had witnessed on a rather unique day.

Later, back at the caravan park, we could hear rather loud music and then the even louder explosions of fireworks as the celebrations of the Whale Festival reached their climax.

I took quite a lot of video. AS soon as I have a chance I will put together some material and post it on You Tube.