We are back in the lowlands so there was no need for a doona last night. We were comfortable with some help from our fan. Today dawned cloudy with rain forecast as possible but it soon cleared into brilliant sunshine with the promise of a hot day. 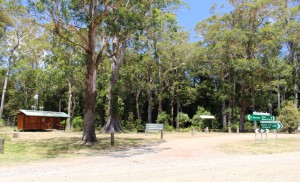 Honeysuckle is a typical rest area.

After clearing some business related matters, including waiting for it to be 9.00 am in Brisbane, we loaded our lunch (but forgot the thermos) and set off. We were following the road that runs from Barrington, just north of Gloucester, to Scone. The road is variously known as Scone Road, Barrington Tops Road and Barrington Tops Track. We followed it right through the State Forests, National Park and State Conservation Areas that collectively seem to be known as Barrington Tops National Park.

There is roughly 35 kilometres of sealed road that passes through the old gold town of Copeland, climbs 500 meters over a range and then descends 500 meters into a rural valley. It then becomes a gravel road as it ascends to the National Park area. 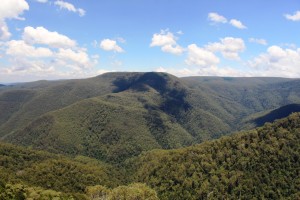 View over the mountains from Devils Hole Lookout

After a few kilometres after the gravel starts the road takes a sharp right hand turn over a stream and starts to climb from about 200 meters to near to 1,500 meters above sea level. The gravel road to the park boundary is in good condition but deteriorates a bit as soon as it crosses the boundary. A sign in council territory advises that you have reached the end of a council maintained road. A sign inside the park boundary advises that the road is not regularly maintained because of lack of funds. A case of taking the high moral ground on the one hand and passing the buck on the other!

The view from Thunderbolt’s Lookout

It was cooler at the higher altitudes so walking was pleasant. We visited the points of interest along the way, guided by a National parks brochure. There are two lookouts of note on this road, Thunderbolt’s Lookout and devils Hole. Both reward a short walk with great mountain views but they are not the equal of those that we gained from Point Lookout near Ebor, although at about the same altitude.

Presumably Thunderbolt’s Lookout is named for the famous bush ranger. He was active in areas not too far away from here so perhaps the lookout was the point from which he patched for his enemies. The National parks brochure is silent on this matter. 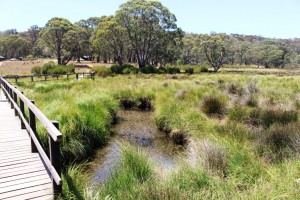 A boardwalk spans Polblue Creek between the day use and camping areas.

We had lunch at the Devils Hole day use area, did the short walk, and then drove on to Polblue picnic and camping areas which are separated by the swampy Polblue Creek. The rangers at the NP office in Gloucester had told us that Polblue was the main camping area. It certainly has space and facilities for a large number of people but the crowds were not there today. The only residents were a couple in an off road caravan. We would have seen only about a dozen vehicles in the mountain area all day and most seemed to be commuting between the major centres at either end of the road. 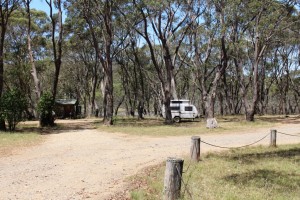 The caravan belongs to the sole residents of Polblue camping area

We chatted to and had coffee with the only tenants in the camping area. They are fellow Queenslanders who have followed a very similar route to ours in arriving at Barrington. Like us they are heading to Sydney and staying at the same caravan park with our stays overlapping. 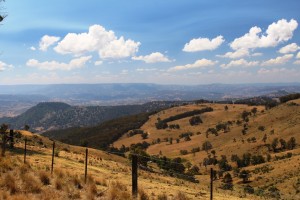 Cleared slopes of the Upper Hunter Valley in the afternoon sunlight.

We crossed the entire area to just past the Dingo Gate at the top of the long steep slopes that lead down into the Upper Hunter Valley. More views of mountains but these were paetly clear of trees and covered with brown grass. Another 15 kilometres and we would have reached the first small town on the way to Scone. But duty called. Someone needed to close the Dingo Gate that had been left open despite a prominent sign that said it should be shut. 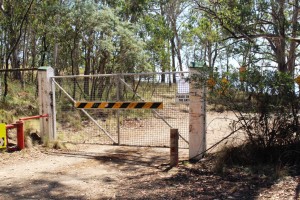 The Dingo Gate after being closed 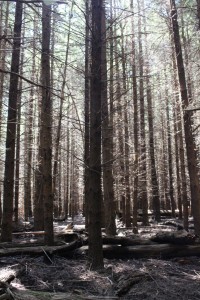 The sun filtering through the pine trees produced an attractive effect.

Not far back from the gate the road runs through a pine plantation. Only 100 meters off the road is a rest area in such deep shade that it seems almost dark when you enter. A short walk leads to the edge of the pines where the normal forest recommences. The effect of the sun filtering through the foliage at the top of the trees was quite striking.

We lingered a bit longer with the folk at Polblue over that cup of coffee than we had intended, so it was near dusk when we reached the van. For the first time on this trip we turned the air conditioning on. The van was quite hot after being locked up all day.