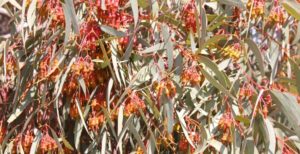 We stopped for lunch near a flowering gum treeWe gave ourselves an easy day on Saturday with only 137 kilometres to the steam museum town of Peterborough. This reasonably substantial town is on the main Sydney to Adelaide railway line, which is also the line on which ore mined in Broken Hill makes its way to the smelter at Port Pirie. Peterborough was a major rail town during the days of steam. It now uses its heritage as a tourist attraction.

The day had improved by the time we had booked into the Peterborough Caravan Park but a chilly night followed. Sunday morning was overcast, but as we made our way to Broken Hill the clouds made way for real warmth from the sun. 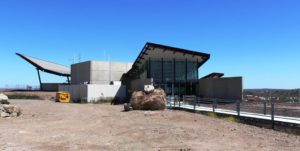 The restaurant building at the Miners’ Memorial.

We booked two nights at Broken Hill to allow for shopping for the final days to home but also to allow us to do the tourist thing. We drove to the Miners’ Memorial at the top of the huge mullock heap that separates the town from the mining area. We were disappointed to find the memorial buildings closed. The restaurant and adjoining gift shop that was so “in” when we were last there, seemed completely closed and the actual memorial building was closed for renovations as well.

Roadside flowers on the road to Silverton

With new owners the Silverton Coffee Shop may reopen.

indicate that it was a substantial town. A coffee shop, still operating on our last visit, is now closed, although the building has been sold. The pub seems to do a good trade and the Mad Max Museum continues to pull in devotees. There are also two or three artists who work from galleries in the town. 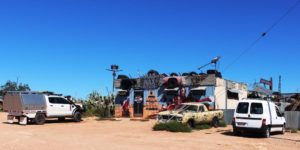 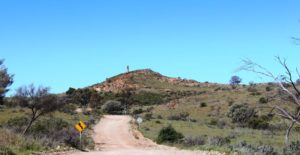 This visit we did the side trip to the Day Dream Silver Mine, where I did the underground tour. The mine is about 15 kilometres off the Silverton Road. In its day the mine was a rich source of silver with its own smelter sighted on a neighboring hill top to take advantage of gravity to assist the smelting process. The tour visited points of interest on the surface before we donned hard hats with miner’s lights for the underground portion of the tour.

Mining equipment under ground. Visitors can stand at the drill and gain some idea of what it was like to work in the mine.

The mine was quite deep, descending four levels. There were only a few steps, as the tour followed the sloping shaft that had itself followed the ore body into the bowls of the earth. The irregularities of the floor provided for secure footing and stout hand rails had been installed. 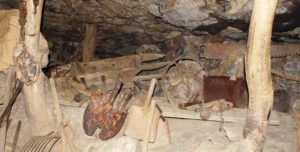 A display of mining tools in an area where the roof is supported by local timber.

Mining tools, both manual and mechanical, were on display in appropriate locations throughout the mine. The guide was an experienced miner with a real gift for telling the mining story. To hear it all right where the underground activity occurred made it all very real. We finished the visit with a mug of tea and fresh scones, baked on the premises. 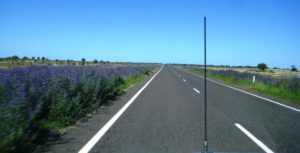 This photo was taken from the moving vehicle. There were no shoulders on the road to pull over.

Tuesday was about making distance in an attempt to avoid rain and strong head winds. Cobar, yet another mining town, was our stopover destination for Tuesday evening. The only town between Broken Hill and Cobar is Wilcannia, where we stopped for fuel. After leaving Wilcannia the elevated roadway runs for several kilometres over Darling River flood plains, before entering low hills. 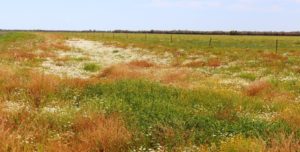 Generally the terrain is flat with only modest hills to provide some variety. Recent rain is evident from water lying beside the road and the abundance of greenery. And wild flower! The sides of the road were covered in masses of purple blooms. The purple is frequently interspersed with a variety of smaller flowers. Periodically the pastures are covered with masses of yellow and white. While watching such natural beauty, the kilometres and hours passed relatively quickly. 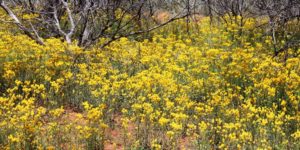 For the second day in succession we have driven past endless kilometres of road side gardens. Colours of white, blue, yellow, orange and shades of red have appeared like a planted garden against a background of the greens of grass, shrubs and trees. Periodically patches of white, yellow and red have run out of sight, between road side trees or reached in masses towards the horizon of the open fields.

The drive was between Cobar and Cunnamulla with a brief refueling stop at Bourke, a distance of around 415 kilometres. We saw the first evidence of the amount of rain that has fallen through the area. Up to now all we have seen, besides the rain, has been abundant grass and wild flowers. 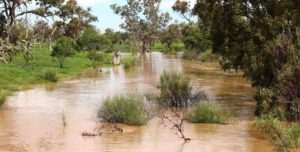 Several streams had broken their banks.

The level of water in the Darling at Bourke was the highest that I have seen in several visits. North of Bourke, drainage channels beside the road were full of water. North of the Queensland /NSW border several streams had broken their banks and a few centimeters of water were running across the pavement in two places. 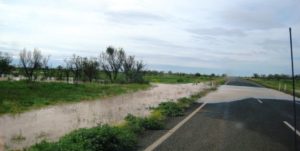 The remaining water over the road was shallow but had obviously been deeper.

From Cobar to Burke we were on the final section of the Kidman Way. From Burke we had joined the Mitchell Highway that terminates where it joins the Landsborough Highway at Augathella. But it all seems to be part of the Matilda Way, but I’m not sure where the Matilda Way starts and finishes. But it is a busy road being a link between Southern capitals and both Northern Territory and Queensland and carries a lot of heavy traffic. We met several over dimensional loads, one requiring us to move right off the road.

The weather had been warmer, but the forecast is for rain and reduced temperatures over night and for the next few days. Fairly strong winds were forecast. When they eventuated they were behind us, pushing us along. 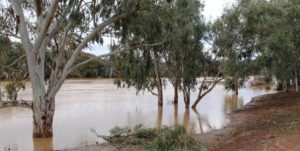 The swollen Warrego River at Cunnamulla. Water heading for the Darling River

Before we booked into the caravan park at Cunnamulla we drove through town to check the water level in the Warrego River. The water level was well below the bridge but much higher than we had ever seen it before.

The forecast rain caught us at Cunnamulla but the greater part of it fell to the north of us. The rain had passed through by morning but we caught up with the last of it on the way to St George. 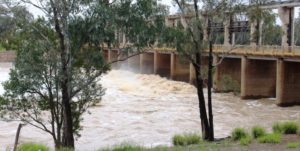 Water flooding over the weir on the Balonne River at St. George

Another 300 kilometres of flat road, some of it a bit narrow but most quite rough, due to periodic flooding, I suspect. The Weir on Wallam Creek, beside the road at Bollon, was overflowing as was the major weir on the Balonne River at St George. All of the excess water is heading for the Darling and the Murray Rivers.

The only disturbance to a peaceful night at the Pelicans Rest Caravan Park was the yapping of two dogs in the caravan next to us, whenever something disturbed them.

Dalby was our destination on Friday, which would have been another 300 kilometre day. But we were there by lunch time so decided to go on a further 100 kilometres to Yarraman. This very pleasant town sits almost at the foot of Bunya Mountains and has a caravan park atop a hill. We had been travelling in sunshine all that day, pushed along by a stiff but a cool westerly, that moderated by evening. But we still needed the heater that night.

On Saturday morning the easterly aspect of our overnight position gave us a brilliant sunrise and a promise of a day with temperatures in the mid twenties.  Saturday was the first day of a long weekend so the road was busy, particularly the lanes leading away from Brisbane. Traffic accumulating behind us made it necessary to keep the rig moving and to pull over occasionally to let our “tail” go by.

We arrived home just before lunch, to start the tasks of unpacking and cleaning and to deal with two months accumulation of dead gum leaves, blown down by winter winds while we have been away.

The promised temperature eventuated. I am back in shorts and all is right with the World.

So ends another trip, shorter in duration than originally intended but not much shorter in distance. We lost about two weeks to wet weather but the days that it did not rain were mostly sunny although sometimes kept rather cool by persistent winds. But we had a good time, saw some new places, met new friends and learned new things.

We can’t ask for much more, can we?