It is only about 45 km from the Crystal Creek camping area to Ingham, where we stopped to refuel, post some letters and refill a gas cylinder that had surprisingly run empty overnight. Surprising, because I thought that it was full. I had filled the second cylinder before we left home thinking that gave us two full. Oh well! 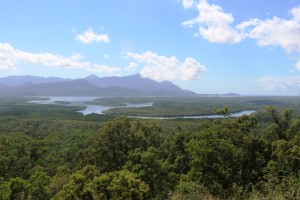 Shortly after passing through Ingham, the road enters the mountains south of Cardwell. The road over the range has been realigned and as a bonus the roads authority has provided a magnificent lookout that alllows views over the southern end of the Hinchinbrook Passage. It provides a great view of this magnificent island.

You may recall that Cardwell was hit by a bad cyclone (was it Darcy?) a couple of years ago, doing immense damage to the resort and marina. From the road we could see boats at moorings next to houses but painted over sign boards at the front gate suggested that the resort and marina is not yet back into full operation. But grey nomads are supporting the town. Caravans were parked in great numbers in the large rest area and along the main street. We have done this part of the coast before, so we kept on driving.

Innisfail was our lunch stop and I got some extra exercise looking for a replacement filter for our water tap. Bunnings let me down. I had to go to the old traditional Mitre 10 store to get what I wanted.

We turned inland for the Atherton Tableland at Innisfail, arriving at our camp site at the Mareeba rodeo grounds at about 4.30 pm. This is a low cost basic site but ideal for an overnight stop. It is run by volunteers to raise funds for their annual rodeo and is conducted like a military operation. In no time we were in a site with power and water. There must have been at least 250 caravans there.

More fuel and perishable food purchase next morning before we headed north for the southern end of the Cape York Developmental Road that commences just north of Mt Molloy, 42 km into our journey. The only significant points of population before reaching Lakeland is Mt. Carbine, a small mining town and the Palmer River Roadhouse, sighted on the river from which it takes its name.

If you don’t turn left at Lakeland you will end up in Cooktown, but that was not the plan, so we turned. Last time we were on this road, about 5 years ago, it was only partly sealed with work under way. The unsealed sections were appalling. Now it is a first class highway, realigned to minimise flood impact, including a new bridge aver the Laura River in place of the former flood prone low level version. As a result, Laura looks more prosperous with a new motel and several caravans in storage while their owners visit the Cape. 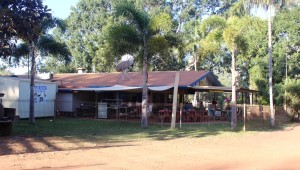 We stopped for lunch under a shady grove. I took the opportunity to let about 25% of the air pressure out of the tyres. We knew that we had several hundred kilometres of corrugations ahead of us. They start where the bitumen stops about 5 km north of town. 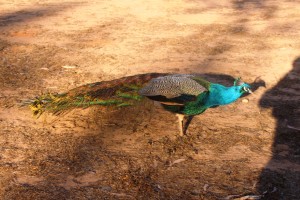 I had some idea of what to expect. The first 10 km or so was quite rough and had to be taken with care but the road then improved to a point where 60 to 65 kph was comfortable, so we made good progress. The terrain varies between flat and hilly. The best sections of road are generally across flat country with the hilly sections not as good. There are many creek crossings, mostly in pronounced dips in the road, almost all of which are sign posted. Both entry to and exit from dips tend to be badly corrugated and although most of the dips have asphalt or concrete at the bottom it is not always well aligned so caution is necessary. The result is that mush of the traffic jams its breaks on at the last minute and then accelerates out of the dip thus adding to the size of the corrugations. 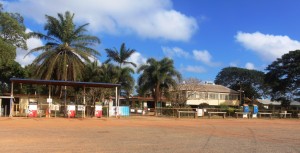 Historic Musgrave Station. Another oasis on a ling dry road

Every 30 km or so there are what are called passing opportunities. They are stretches of asphalt, full road width, from 5 to 10 km in length which give some respite from the dirt road. But most motorists don’t wait for the sealed strip. They come rocketing out of your cloud of dust, pass and pull in front of you and smother you in their dust. And then there are the road trains. They are something else again! 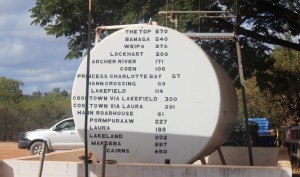 Distances from Musgrave on a fuel storage tank.

We did 75 km of unsealed road with about three sealed sections to bring us to the Hann River Roadhouse, where we spent our first night along the Cape Road. We joined about a dozen other camps, spread over the slight slope to the river. The roadhouse provides fuel, food and liquid refreshment, as well as accommodation to the travelling public. Facilities are basic but adequate. We enjoyed a comfortable night, after dining on two of their more than adequate hamburgers. 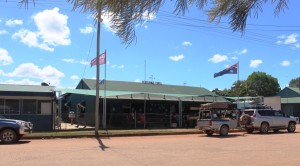 Coen’s Exchange Hotel is frequently referred to as the Sexchange Hotel. Note the sign on the roof

There was more of the same next day. We stopped at Musgrave Station, the next road house along, for a bit of a look. It has a museum that tells the story of the overland telegraph, which we will investigate when we stop there over night on our return journey. Then on to Coen which is 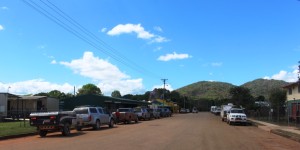 the third most substantial settlement on the Cape (after Weipa and Bamaga) for fuel, lunch and some communication. The town has Telstra internet coverage. We then travelled on a further 60 km to Archer River Roadhouse as our overnight stop, making about 230 km for the day. 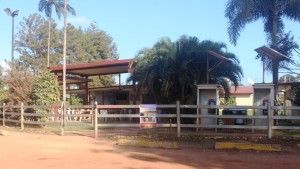 Archer River is a more modern establishment that Hann River, but provides the same services and charges about the same prices. Like Hann River, it sits on a hill above the river. Flood level markings on the amenities block indicate the amount 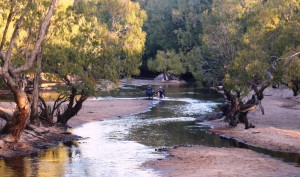 of water that rushes down these rivers during a cyclone.

Archer River is a very pretty spot with the greatly reduced water flow of the dry season winding its way through extensive sand banks, to pass under the bridge in the 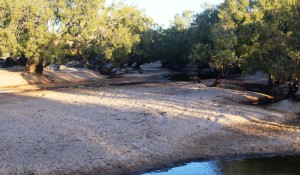 causeway, on its way to the Gulf of Carpentaria. Some travellers camp on the sand and unfortunately too many mark their stay with litter. Dinner in the van that night. 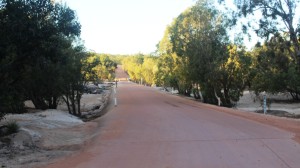 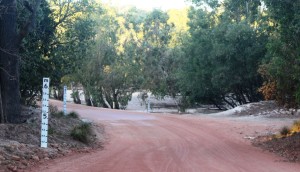 They have some decent floods around here

We started the next day a bit apprehensively, as we had been given a report in Coen that the road to Weipa was particularly bad. But the report was largely unfounded. There is a bad patch of about 10 km around 60 km out of Weipa, but the graders are working on it. 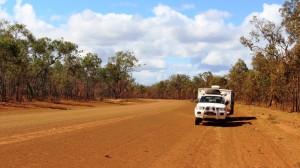 The rest is quite good and we did the 200 km in just over 4 hours, including two substantial stops. 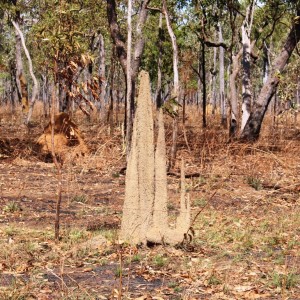 along the haul road bearing a load of bauxite to the processing plant where it will be processed for shipment to an alumina plant in Australia or overseas.

We are now ensconced in the Weipa camping grounds among a throng of campers, all doing what we are doing. Participating in their very own Cape York Adventure.