Note: A video covering the material in this post can be found at the foot of this blog post.

We left Phillip Island amid showers sweeping across Westernport Bay and the adjoining coastal plains. Our route lead along the South Gippsland Highway, Monash Freeway, skirting around the city to reach the Tullamarine Freeway and finally to the Hume Highway. We were headed to Bright to see if Autumn had yet reached the area, famous for its Autumn colours.

We only took necessary breaks, arriving in Bright in the late afternoon. Our motel backed onto lawns that run down to the path that runs along Ovens River. We look our afternoon tea to the lawn and were joined by some Parrots.

The Liquid Amber trees were turning nicely but the Poplars and other deciduous trees had only just started to put on their show.

We left town next morning via Yackandandah, a nearby town also known for its colours, but it seemed to be running later than Bright.

We were bound for Hume Dam on the Murray River to see what it looked when when full. Excess water was being released to a huge roar, in sufficient quantities to fill the river down stream to the top of its banks. When we came through there on our way home from Tasmania two years ago the water level was well below the spillway and further up stream, cattle were grazing on river flats that had been exposed for years but now are inundated by the water in the dam.

We made our way to the Hume Highway and continued on to Goulburn for the night.

Heavy rain was forecast for the recently flooded North Coast of NSW so we decided to cross the Blue Mountains and make our way home inland. But first we wanted to see the recently overflowing Warragamba Dam. Warragamba was not far off our track.

We thought that refreshments might be available at the visitor center at the dam, but no such luck. We did our tourist thing under increasingly threatening skies. Walking back from an observation point I took a wrong turn and came upon a pair of Rosellas. Then a Wonga Pigeon landed on stairs behind me, the first of this type that I had seen.

Soon, after departing the dam, the sky opened and stayed that way. As we approached the Great Western Highway, traffic congestion was becoming an issue so a quick change of plans and we were on the highway heading west. With the rain still falling and a stop becoming necessary, we found a convergent McDonald’s and stopped for lunch. Back on the road the rain continued to well on the way to Mudgee, our next overnight stop.

Mudgee is a week end town, thriving on visitors from the coast, so they have their weekend on Monday and Tuesday. We were there on Monday night and found most restaurants were closed. The Chinese restaurant at the Gold Club was recommended. They served excellent food in huge quantities. We only eat half the food served to us but were able to take the leftovers. They were sufficient for dinner the following night.

Next morning, we had passed through Gulgong and Dunedoo when a phone call from last night’s motel advised that I had left my binoculars behind. So, after returning the necessary 85 kilometres, we had coffee and started again. We left Mudgee, this time by the Ulan Road, then through Binnaway so saw some new country. Lunch at Coonabarabran and a stop for the last night at Moree to rest and deal with leftover Chinese food.

The plan was to do the last leg of the journey via the Gore Highway to Toowoomba and then the Warrego Highway to Brisbane but as we left Goondiwindi a roadside sign advised that the Gore Highway was closed. So on through continuing rain with a stop at Warwick and arrived home mid afternoon.

Eighteen days and a bit over 5,000 kilometres with average weather and escalating petrol prices. But we saw all of the relatives that were planned and respects paid at two grave sites. In all a successful trip.

We stopped over in Dubbo for three nights to see the Taronga Western Plains Zoo. We have heard good reports of it for years, and have often driven past on our way to and from Melbourne. This time we decided that we would visit it. So after attending to chores and some of the other things that keep the ship running we had lunch and drove out to the zoo. It is only a short distance from the caravan park. 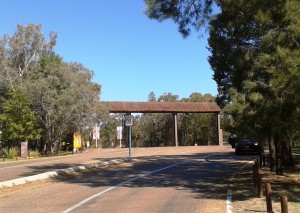 To say that the zoo has been well done is an understatement. After spending over seven hours there I can’t think of any significant improvement to the way that it has been developed. The most common way to see the exhibits is to drive around and park at each enclosure. Some walking is necessary to see all of the exhibits but most can be seen from the road. Alternatively you may hire a golf cart or a bike. Or bring your own bike, if you like. The road traverses the park in a series of sweeping loops. This arrangement lends itself to the curved enclosures that provide a good view of animals, even when they think they are hiding. Enclosures are sunken below the road level. Fences are at the foot of mounds constructed between the road and enclosures so that when you get out of your car you ascend the small mound. The fence of the enclosure is right below you at the foot of the mound. You are not overly conscious of the animals being caged as you watch them. Some enclosures have observation decks and the African Viewing Tower allows observation of several enclosures. The zoo covers 300 hectares of open-range country with exhibits built among the scattered scrubby pine trees that are native to the area. Other trees have been added as required. 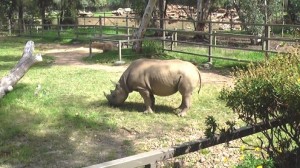 Animals are mainly from Africa and Asia but there is a good display of Australian mammals with the koala as the central exhibit. At home we have koalas in the trees over our side fence but we don’t get the views provided to visitors to the Western Plains Zoo. The wallabies in this enclosure are so tame that children, yes and this old child, were patting them. 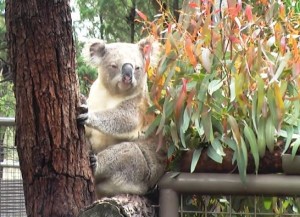 We spent about two and a half hours there on Saturday and most of Sunday. The cost for an adult to gain access on two consecutive days is $44.00. Excellent value when compared to the entry fee for theme parks in the Gold Coast area.

Dubbo is a very substantial inland city with a population of more than 40,000. I don’t think I have ever seen a town with so many motels. Where do the people come from to fill them?

Again under almost cloudless skies we set off on the short trip to Mudgee. The road leads through more grazing country but with a few more hills than we experienced in the Castlereagh valley. We passed through a couple of country towns, the most interesting of which was Goolma.

Looking for a toilet break we found a small stand alone three door structure surrounded by a number of story boards setting out a great amount of information about the attractions to be found along the route that runs from Singleton through Mudgee, Lithgow and Oberon to Canberra.  It was a great example of the kind of promotion that is helping to build tourist numbers in rural Australia. 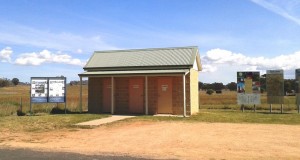 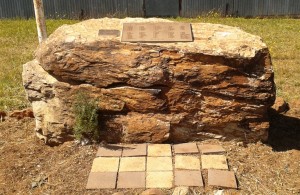 Toilets and War Memorial at Goolma

Opposite, on the other side of the road, a small memorial to lives lost in two World wars and Vietnam has been built. The number of names from such a tiny town is surprising. I guess it is an indication of the higher density of the farm population of the era and the number of farm boys who went to the war. 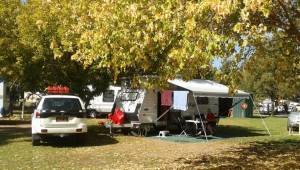 Under shady Autumn trees at Mudgee

Mudgee is trying to be a tourist town but falling at some hurdles. It is a leafy town after the style of Bright in Victoria but has some distance to go before it reaches that level of sophistication. There are lots of vineyards and as Mudgee is a reasonable week end drive from Sydney or Newcastle it is attracting the latte set in large numbers. It promotes itself as a wine and food centre but on a Monday evening when we wanted to go out to celebrate Ruth’s birthday almost nothing but pubs and clubs were open. With the weekend over most hospitality establishments were taking a couple of days, or nights, off. We did finally find a restaurant open and enjoyed a superb meal.

We have been having trouble with fittings coming off the cables from the antenna to the TV. Some unsuccessful DIY on my part!  Last night while looking for a restaurant we saw a Jaycar shop so were on their door step first thing this morning to see if they could put more permanent fittings on. They were able to do so and the result seems to be most successful.

After a haircut (for me) and some shopping (for Ruth) we set off to look at the area, which means look at wineries. I am never enthusiastic about wine tasting when I am not interested in buying. As this was the case today it only took a pushy cellar door attendant and a bad white wine to destroy our motivation. We decided to drive around the area instead, looking at the vineyards from the road and generally getting the feel of the place. There is a great deal to see in the surrounding area. A longer visit in the future could be on the cards. 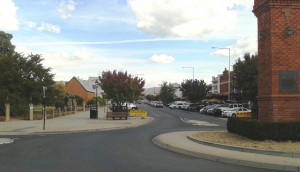 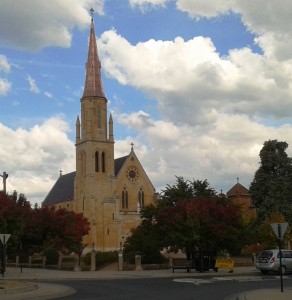 After lunch we decided to visit the neighbouring town of Gulgong. There are two main roads that link Mudgee and Gulgong. The Castlereagh Highway is a distance of 26 km and Henry Lawson Drive is 30 Km. Yes, this is Henry Lawson country. Lawson was born in Grenfell but spent a great deal of his early life in the area and in Gulgong in particular. The good folk of that town have recognised his former citizenship with a fine museum. It provides a fascinating snapshot of life in Australia in the late nineteenth and early twentieth century’s. 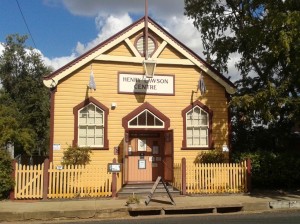 Mudgee was built to service rural industries. Its streets are wide enough to turn a 20 animal bullock team. Gulgong is a gold rush town. It was surveyed with its streets following the tracks lined by miners’ tents and shanties. Streets are consequently narrow. In some places when cars are parked on both sides of the street the thoroughfare becomes one way at a time. 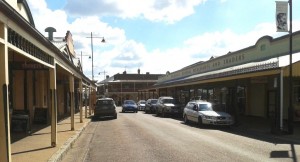 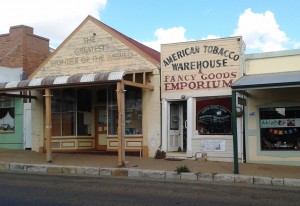 During the 1980s it was realised that changes to Gulgong were destroying a historical treasure so restrictions were put in place. Now a modern society lives and works in a town that is over one hundred years old.

On the way back to Mudgee on Henry Lawson Drive there is a monument to Lawson, built on the site of the old family home. The fireplace still stands. History is around every corner in this area. 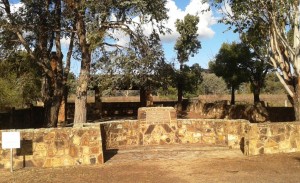 The memorial on the site of the Lawson family home