We have just about reached the end of day 6 of our trip as I  write this, sitting out beside the van in the Big Crystal Creek Camping Area in the Paluma National Park, about 60 km north of Townsville. We would have peace and tranquility if the people in the van near us were not playing rock music. But it’s not heavy rock.

The original plan was to take four days to Airlie Beach, travelling  via the inland route to Rockhampton and then the Bruce to Proserpine, but having lost the first day with unexpected things needing to be done to the van, we decided to do the Bruce Highway all the way and in three days instead of four.

The most striking feature of the drive was the number of vans coming south. We did a couple of counts. For much of the time we were meeting vans and motor homes at a rate of better than one a minute. It seems that most southerners coming north, travel through inland Queensland before turning towards the coast for the trip home. For this reason there were few vans travelling in our direction on the Bruce Highway. 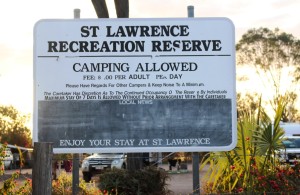 We reached Miriam Vale on the first day and St Lawrence the second, arriving at Airlie Beach at the end of the third day. At St Lawrence the council has provided an extensive over night camping area, supported by donations from
users. As well as extensive standing areas

there is a modern amenities block with flush toilets and coin-in-the-slot showers. We drove into town before we left. The Post Office is the only retail business and the street was as quiet as Dodge City at high noon. St Lawrence was one of the first towns settled on the coast of Queensland.

We had come to Airlie Beach to do a cruise to Whitehaven Beach, as we had decided to spend a Red Balloon voucher that the family had given me for my birthday, on the cruise. And Airlie is on the way to Cape York anyway. And who needs an excuse to go there? 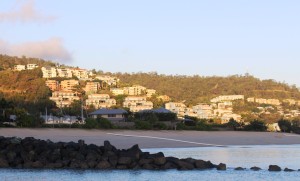 Units on the hill at Airlie Beach in the morning sunlight

An early start was required. Out of bed at  5.00 am  and at the Cruise Whitsunday terminal at 6.10. Heavy cloud greeted us as day broke, but by the time we boarded the “Orca”, a sea going catamaran, the cloud had burned off to produce a clear sky that smiled on us all day.

Arrival of the ferry at Daydream Island

Cruise Whitsunday run the ferry service that connects the island resorts. The tours are run in conjunction with the passenger transfer service. The first call was Daydream Island to exchange passengers and then off for the 45 minute run to Hamilton Island. We stayed on board for both of these ports. 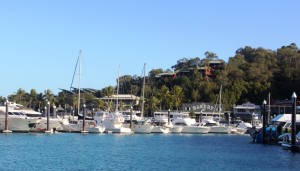 Then we were on our way to the main event. To reach Whitehaven Beach the boat passed to the north of Hamilton Island and then powered across relatively open sea to Solway Passage, the gap between the islands that leads to the Beach. There was reasonable swell 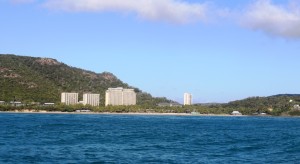 running, so the boat was moving around and spray was billowing from the bow. The kids on board loved it. And so did this big kid. The pure joy of a floor under my feet that moved with the sea.

When we reached our destination the boat nosed 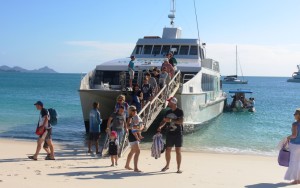 into the beach and we all disembarked via an extending ramp, along with some basic supplies so that we wouldn’t perish during the 2 hours that we were ashore. Our fellow passengers spread out on the huge beach. Some swam, others sun baked and others walked. Kids

built sand castles. One Dad buried his daughter and turned her into a mermaid. We walked and then sat in the shade, fortified by a cold drink and a Mars Bar.

Back on board, the “Orca” headed north to make a complete circuit of Whitsunday Island as we returned to Daydream Island where we changed ferries for our return to Airlie Beach. 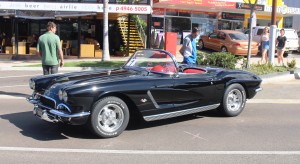 The one and only Chevy Corvette

The Whitsunday Reef Festival was on this weekend so we walked along the main street of Airlie to take a look. Most activity is at night ,which befits a place like Airlie, but there was a brilliant display of restored classic cars, with a couple of vintage models as well. Oh, those Chevy Corvettes. Wow! There was also a very loud rock band. And I mean LOUD.

A bit of grocery shopping and then back to camp. A most enjoyable day! 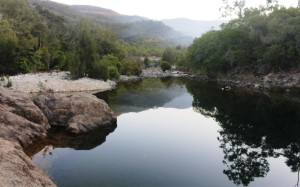 Today we have travelled from Airlie Beach, a distance of about 360 km. Some  cloud around this morning but a mostly clear afternoon. Very pleasant driving.

This camp site is on Big Crystal Creek which has a large rock pool, currently full of running water. And you have guessed it. The water is crystal clear. It is in great demand for swimming and had a real workout that day, we have been told.